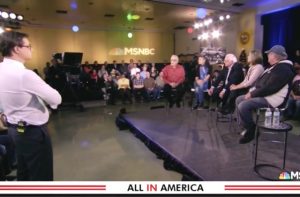 MSNBC’s Chris Hayes held a town hall in Kenosha, Wisconsin today with Senator Bernie Sanders and some Donald Trump voters to get to the heart of why they went for Trump in this election cycle.

One of the Trump voters was actually a Democrat who told Sanders he would have voted for him, voted for Democrats down-ticket, and admitted he voted for Trump because “he wasn’t Hillary.”

Another Trump voter, Matt Augustine, talked about jobs and factories moving out of Kenosha and how hard it’s been for him and t, and he felt Trump spoke directly to those concerns. Gail Sparks said that she liked Trump because she’s tired of career politicians.

Augustine said that he knows a lot of people who only liked Trump and Sanders because they weren’t the only politicians “giving us a bunch of hogwash.”

Sanders engaged with them on how they feel America’s trade policies have hurt workers and how corporations need to be investing more in America.

During another part of the town hall, a Muslim woman spoke up about Trump’s inflammatory rhetoric about a Muslims and immigrants on the campaign trail.

The reaction from the Trump voters to the Muslim ban was to say 1) they don’t want that to happen and 2) it won’t happen because either Trump didn’t mean it or Congress would never allow something like that.

Sanders asked them why they like Trump if it sounds like they think he’s either lying or just saying “unconstitutional things.” Augustine said Trump was not lying, he was just having a conversation with the American people about important issues, and as for the second half, he said Congress does unconstitutional things every day.

Watch the clips from the town hall above, via MSNBC.