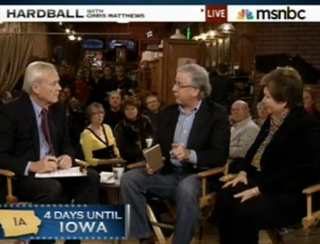 With the Iowa caucuses on the horizon for Tuesday, the strain started to show today on some of the few people in America putting in 100% at work today: the Republican presidential candidates. This is particularly true for Newt Gingrich, who started crying during a talk when prompted to talk about his mother, but his breaking up was excused today on Hardball, where Chris Matthews broke down the “brutal” dynamics of the political game and gave Gingrich the benefit of the doubt.

Matthews repeated the moment and added a warm analysis to the bit, noting that “politicians when they lose elections or have trouble, cry,” and that it was a phenomenon that crossed party lines. He argued that this was due to the nature of the business. “Politics is the only business where you ask everybody to like you, and you get a verdict from everybody. And they all tell you, in most cases, ‘we don’t like you,'” Matthews explained. “And every once in a while, they say they like you, and then they tell them they don’t like them… it’s a brutal business,” he concluded. Matthews has certainly not been easy on Gingrich in the past, but he refused to go after him for the tears.

Howard Fineman was not as sympathetic as Matthews, however, and instead took Gingrich on for being “in terrible shape” and too old for the race. “He looked like he’d taken on more than he could handle,” he argued, and “thinks he can go like he went thirty years ago.”