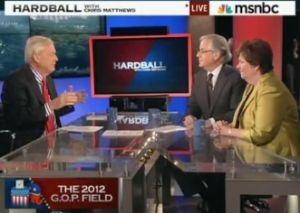 Chris Matthews noticed that Republicans are still clamoring for a new, exciting candidate to enter the race for the Republican presidential nomination and concluded the reason must be because “there’s something wrong with Mitt Romney.” Howard Fineman suggested many of Mitt’s old colleagues at former jobs consider him to be a “swell guy” (and with a word like that these colleagues must be very old), but he’s still not making a personal connection with the voters.

Matthews joked that Romney is so “perfect” that he “probably never had a hangover.” Matthews then suggested what he is truly reminded of whenever he thinks of Romney:

“I look at him, I see perfectly formed words, perfect articulation. The Hall of The Presidents – you know when [Abraham] Lincoln stands up in Disney World and speaks to us. But that’s not really a person, that’s a machine. He looks like a political machine.”

While Romney makes Matthews think of Disney World, a different Republican candidate seems to excite Matthews much more. Republican Congresswoman Michele Bachmann would be appealing to social conservatives and apparently also to Matthews and his desire to have an interesting race to cover. Matthews predicted:

“Michele Bachmann will run and she will do very well against the field. . . . Michele we’ll ready to cover you. Positively on occasion. And negatively on occasion – perhaps more frequently.”

Matthews is most enjoyable when he’s taking playful jabs at Republicans rather than aggressively going for the jugular, and his criticism of Romney for being a robot and his humorous recognition of his storied feud with Bachmann, suggests that even with boring candidates, Matthews can still find ways to keep coverage of the presidential race interesting.