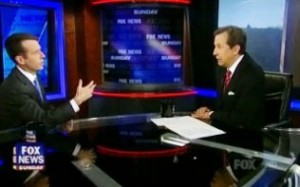 On Fox News Sunday, host Chris Wallace sparred with President Obama‘s senior advisor David Plouffe on why the president didn’t examine violence in video games and movies further as part of his comprehensive package to reduce gun violence. “Why didn’t he challenge his friends in Hollywood, supporters in Hollywood, ‘clean up your act and knock it off”? Wallace asked.

Plouffe responded that Obama had spoken about it throughout his presidency but Wallace pushed him further. Obama had an opportunity, he said. “Why didn’t he say to Hollywood, ‘stop the video games'”?

According to Plouffe, it “starts with parents” taking responsibility for their children. Plouffe also attempted to note that the study commissioned by the president on violent media “is really important” because “scientific background” helps explain the causation between video games and gun violence.

Wallace cut him off by asking whether he really thought a study was needed to understand that children sitting around playing violent video games was “bad.”

“The argument is that he’s going easy on Hollywood,” Wallace added.

Plouffe noted that the president “has been clear” about his stance on violent media, but swung the conversation back to the “core” issue:

“There is a huge consensus in the country, including a vast majority of Republicans, that things like assault weapons, high capacity magazines, universal background checks, making progress on mental health – these are things we should and can do, to help reduce gun violence.”

“No law or set of laws will end violence,” he added. “But if we can save one life through action, we should take it.”