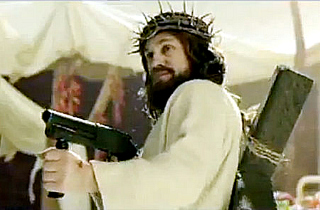 The perpetually-outraged folks over at American Family Association (home to eternally gay-bashing radio host Bryan Fischer) have successfully pressured Sears and JCPenney into pulling their ads from Saturday Night Live in the wake of last month’s controversial “Djesus Uncrossed” sketch.

The “anti-Christian” sketch re-imagined Oscar-winning Django Unchained, replacing the title character with Jesus Christ going on a bloody revenge fantasy, gunning down the enemies who persecuted him. “He’s risen from the dead, and he’s preaching anything but forgiveness,” said the voiceover.

As I’ve written before, it was actually a pretty funny reappropriation of the Tarantino-esque “oppressed person takes out incredibly bloody revenge” (a la Django and Inglourious Basterds). Yet appalled “folks” like Fox’s Todd Starnes, et al, predictably called the sketch “blasphemous” and said: “People need to understand something: Jesus wants to be your lord and savior, he doesn’t want to blow you to kingdom come.”

See… umm.. that’s actually the point of the joke.

For the humorless: Everyone knows the story of Jesus turning the other cheek to his persecutors. And so there’s something called humor… and irony… which form the basis of what’s called a “joke.” In this case, the joke is that the man who turned the other cheek instead goes guns a-blazin’.

Then again, it’s a moot point to try and explain a joke to the type of people who find anything and everything an affront to Christianity if it’s not depicted in the way, say, someone like Starnes would prefer.

And so, of course, the American Family Association — they of incessant boycotts — successfully waged a campaign to have family-friendly companies like Sears and JCPenney remove their advertisements from NBC.com clips of SNL.

“We received customer feedback about our ads running on NBC.com and Hulu in a rotation with other advertisers around the online rebroadcast of that particular SNL episode,” Sears wrote in response to the letters they’d received. “We informed customers that it wasn’t supposed to happen, and while going forward we may advertise on the broadcast, we’ve taken steps to ensure that our commercials do not air online exactly as they did in this situation.”

Despite how prudish and annoying these people who have no ability to change the channel are, I am a firm believer in the power of the consumer and the market. And so one can’t help but respect the two companies’ wishes to please their customer base above all, however silly the whole “controversy” may be.

Watch “Djesus Uncrossed” below and decide just how outraged you are: