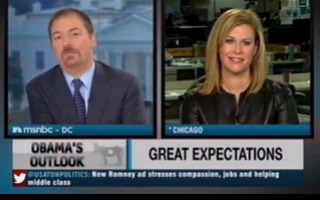 Obama deputy campaign manager Stephanie Cutter appeared on MSNBC’s Daily Rundown Wednesday morning to talk about how the President was preparing for his upcoming debate with Mitt Romney.

Cutter conceded that Romney had proven throughout the primary he is “pretty good on his feet,” adding that while “we have a great confidence in the President,” the reality reality remains that he has not participated in a debate in four years.

Host Chuck Todd then noted, as he’s done before, that there is quite a contrast between President Obama’s schedule now and President George W. Bush‘s from this time from years ago. Bush, he said, had met with a “slew” of foreign leaders, whereas Obama hasn’t met with any. One adviser, he shared, even said that if the President meets with one world leader, he’ll have to meet with ten others. “That’s the job sometimes,” Todd pointed out. “This doesn’t seem like a very defensible position.”

“Well, you know, I don’t want to get into the President’s schedule,” said Cutter, “and certainly this is really question for my colleagues at the White House, but I do know that when you’re the president of the United States, you’re always talking to world leaders. It’s not just one given event, it’s every day. And in just the last couple of weeks, there’s been a lot of talks with the world leaders. And I think that will continue.”

Todd then showed Cutter a new Romney ad running in Ohio, asking her whether she believes it’s in reaction to his previous remark about the “47 percent.” Cutter said that economists forecast 12 million new jobs over the next four years, with Todd saying he hasn’t heard a specific jobs pledge from the President.