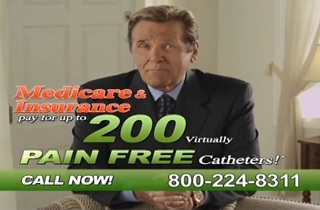 Chuck Woolery, iconic former host of game shows like Scrabble and The Love Connection, is also a conservative activist and pundit, but he’s got a new gig that has him enjoying a golden shower of big government cash. While Chuck is no fan of government spending, he makes an explicit pitch for some sweet, sweet teat-milk in a new ad for Medical Direct Club‘s Virtually Pain Free Catheters.

If you’re a regular viewer of basic cable, you probably already know that there have been major advances in catheter technology over the years, and that there should no longer be any reason for catheter patients to risk infection by re-using them. That’s because hugely popular socialist program Medicare decided to stop forcing beneficiaries to get urinary tract infections in order to justify the cost, a policy change that occurred during George W. Bush‘s presidency:

This change was advocated for by medical equipment companies, health organizations, and universities which saw the manufacturer’s term “single-use” to mean that the sterile catheter should be used one time and then discarded, not thoroughly cleaned for further catheterization use which is what many users were forced to do.

The problem is that some catheter users might not be aware of the policy change, and continue the practice of washing and reusing, but thanks to catheter companies like Medical Direct Club, the message is getting out. In Chuck’s ad, he informs viewers that Medicare covers up to 200 catheters per month, “at little or no cost to you.”

That’s not exactly true, though. While Medicare pays for the catheters, it’s people like you and me who pay for Medicare, a concept that Chuck would normally classify as “socialism,” but in this case, qualifies as a good day’s work for him. It’s a valuable service that Chuck is providing, so no one should begrudge him a big, fat, taxpayer-augmented paycheck. Maybe he could just keep it in mind the next time he’s lifting his leg on government-funded health care.