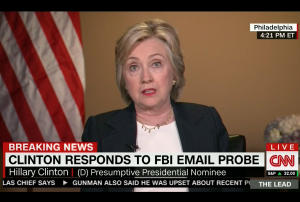 Hillary Clinton broke her silence late Friday afternoon and briefly addressed the devastating FBI findings about her private email server. In a stunning display of defiance, Clinton completely rejected FBI Director James Comey’s finding that she was “extremely careless” in the handling of classified information.  This unabashed display of arrogance is appalling and serves as a reminder to everyone that the Clintons have no shame. Clinton knows it is all but certain Director Comey will not speak publicly on this matter again. Therefore, she has no problem distorting his testimony – that was given under oath – to make it appear as a less damning indictment on her fitness to serve in government. She also knows a majority of the media will give her a pass on the continuous and blatant misrepresentation of the facts surrounding her use of a private email server. Anyone watching her interviews on Friday saw this on full display.

During an appearance on CNN with host Wolf Blitzer, Clinton was asked whether she accepted Director Comey’s finding that she was extremely careless in her handling of classified material. Rather than showing some humility and deferring to the man who literally just saved her prospects at a future political career, Clinton rejected it. In fact, not only did she reject it, she essentially argued that Director Comey didn’t really mean what he said. You cannot make this stuff up.

In response to Blitzer’s question, Clinton said, in part:

“Well, I think the director clarified that comment, to some extent — pointing out that some of what had been thought to be classified apparently was not … And, indeed, any of the … documents that have been referred to, I think, were not marked or were marked inaccurately, as has now been clarified.”

A few minutes later Clinton appeared on MSNBC where she doubled down on this claim in response to a similar question from Lester Holt:

“Well, Lester, I think, yesterday, Director Comey clarified many of the issues that you’ve just alluded to. Very quickly, he clarified, as did the State Department, that the very few — no more than three documents — that they thought might have some kind of marking, two of them were the result of human error. They were not classified.”

Where did this new talking point come from? From spinning Director Comey’s testimony as only a Clinton can, of course. While nothing will likely ever top her husband’s infamous line, “It depends upon what the meaning of the word ‘is’ is,” the spin on Director Comey’s testimony comes close. It also shows how little respect Clinton has for the intelligence of the American people.

During a brief exchange in the middle of Director Comey’s testimony, Democratic Congressman Matt Cartwright asked about the emails with classified markings found on Clinton’s server. Director Comey did say that some of those emails did not contain all of the proper classified headings. However, he did not say that the material was improperly determined to be classified, or that it was not actually classified. He was simply saying that they did not technically contain all of the classification markings. For that reason, Director Comey said Clinton’s excuse that she didn’t know the material was classified was reasonable – only with respect to those emails. Not to the hundreds of other emails that “any reasonable person” in Clinton’s position should have known contained classified information. This extremely generous interpretation is one reason Clinton walked away without a criminal indictment.

Just walking away without an indictment is not good enough for Clinton though. She has to come out and spin that already extremely generous interpretation into something more. In doing so, she is right back to where she has been all along – totally misrepresenting the facts to the American people. And the media largely allows her to get away with it at every turn. Neither Holt or Blitzer truly pressed Clinton on this matter. She probably knew that would be the case before accepting the interviews.

Until the media starts to actually hold Clinton’s feet to the fire, this shameless game will continue. Our leaders used to be held to a higher standard. The Clintons, however, seem to be continuously rewarded for lowering the standards to which we hold our elected officials. As a result, Hillary Clinton is likely to learn only one lesson from the whole email controversy – not to get caught; and make no mistake, she’ll do anything to make sure she never gets caught again.