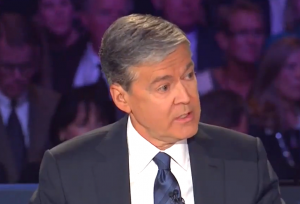 I had to watch it again.

I had to make sure I witnessed what I just witnessed.

And upon absorbing the whole thing and double checking my notes from watching last night and again this morning before sunrise, they were practically identical. Conclusion: CNBC, a solid niche network with solid talent, just performed the worst moderation of any debate — and we’re including all presidential, vice presidential, fictional… the one from Old School (Will Ferrell’s Frank the Tank vs. James Carville moderated by Jeremy Piven’s Dean Pritcher), the one from Clueless (Alicia Silverstone vs Amber on the plight of Haitian refugees) — in American history.

So who’s to blame? Here’s your Top 3 culprits:

1) Gold — John Harwood. I was foolish enough to believe that Harwood, who doesn’t hide his biases leftward, would be professional and (more importantly) aware enough of being on the biggest stage of his career to ask substantive questions without editorial. First question out of the gate? Dubbing the GOP frontrunner’s (RCP average) candidacy as fiction, as right out of a “comic book.” That set the tone for the entire evening, and most of the candidates on stage sensed what was happening. Ted Cruz, who tied winning this debate with Marco Rubio, seized the opportunity with this haymaker:

“Let me say something at the outset,” said Cruz. “The questions that you have asked so far in this debate illustrate why the American people do not trust the media.

“And if you look at the questions: Donald Trump, are you a comic book villain? Ben Carson, can you do math. John Kasich, will you insult two people over here. Jeb Bush, why have your numbers fallen? How about talking about the substantive issues people care about.”

I’ve never been one to reflexively use the term “liberal mainstream media” anywhere–TV, radio, columns. It’s a beaten-down term that sometimes has some weight (via a specific hard example) behind it, but oftentimes doesn’t (via reaching to connect the dots around conspiracy theories). And it’s used so often that the impact gets lost (Google any instance the term “liberal mainstream media” has been used in this space, win valuable prizes). But last night wasn’t one of those times where Republicans and conservative media were whining without warrant for being treated different than their Democratic counterparts. They were treated differently. Blatantly. At two points Harwood outright lied (yes… lied… these weren’t cases of simply misstating the facts).

The first instance regarded Rubio’s tax plan, which Harwood had to correct himself on in a story written two weeks ago:

HARWOOD: Senator Rubio, 30 seconds to you. The Tax Foundation, which was alluded to earlier, scored your tax plan and concluded that you give nearly twice as much of a gain in after-tax income to the top 1 percent as to people in the middle of the income scale. Since you’re the champion of Americans living paycheck-to- paycheck, don’t you have that backward?

RUBIO: No, that’s — you’re wrong. In fact, the largest after- tax gains is for the people at the lower end of the tax spectrum under my plan. And there’s a bunch of things my tax plan does to help them. Number one, you have people in this country that…

HARWOOD: The Tax Foundation — just to be clear, they said the…

RUBIO: …you wrote a story on it, and you had to go back and correct it.

The second time Harwood lied regarded the length of the debate itself. Per about 1,000 media outlets and the network itself, CNBC had planned for three hours, but shortened it to two after Trump and Carson threatened a boycott. And when Trump was bragging about getting the network to acquiesce to his demands quickly, Harwood inexplicably insisted the debate was two hours all along. It’s not hard to imagine an executive producer back in the control room using the CBS Sports director line from the movie Tin Cup, when Kevin Costner’s Roy McAvoy was self-destructing on the final hole of the U.S. Open: “That’s insane! Somebody tackle him!”

Needless to say, no objective person will take Harwood seriously about anything for a very long time. This was career-altering stuff we witnessed last night.

2) Silver — Becky Quick. She had Trump dead to rights on a disparaging quote regarding Mark Zuckerberg and Rubio (calling Rubio the Facebook founder’s “personal senator” on his own website). We’ll avoid the details, because the true relevance here is Quick’s preparation and sourcing. Here’s the transcript:

QUICK: You have been very critical of Mark Zuckerberg of Facebook who has wanted to increase these number of H1b —

TRUMP: I was not at all critical of him. In frank, he’s complaining that we’re losing some of the best people … I am all in favor of keeping these talented people here so they can go to work in Silicon Valley.

QUICK: So where did I read this and come up with this you’re —

TRUMP: Probably, I don’t know. You people write this stuff.

Moderator 101 stuff: If you’re quoting someone to their face with millions watching, you might want to have the source of where that quote came from at the ready. Quick did not, even after having weeks to prepare for such a moment. Again, like Harwood, this was another unforced error that will at least ensure she’s never part of any presidential debate going forward.

3) Bronze — Reince Priebus. The RNC Chair should take a few lessons from Debbie Wasserman Schultz, who rules with a Vladimir Putin-like iron fist when it comes to debates, format, moderator selection, etc. You can blame CNBC all you like, but Priebus agreed to this Fugitive-esque train wreck. Many conservatives on Twitter are calling for him to be fired for allowing Harwood anywhere near the moderator table and not vetting the network better beforehand. That won’t happen, of course, but if and when it eventually does, mark Oct. 28/CNBC in your calendar for when that ball got rolling.

Honorable mention — Saturday Night Live. Will NBC mock their own sister network the way they did Fox and CNN for prior debates? Don’t count on anything too edgy… we’ll put it that way.

The Republicans held their third debate last night. It was so bad, it had to be viewed twice just for confirmation alone. And just like the first two debates, the next day we’re not talking about who made the best arguments, presented the best ideas or who appeared the most presidential.

Instead, in a recurring theme on this reality show: It’s all about the moderators, the food fights, and in last night’s case, the unmistakable bias marinated in snark.