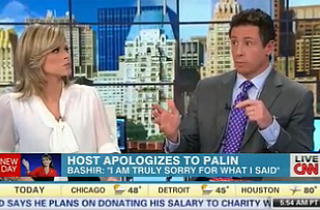 On CNN’s New Day Thursday morning, anchor Chris Cuomo praised MSNBC’s Martin Bashir for his apology to Sarah Palin, and offered context for the “rhetorical” point about slavery while criticizing the “defecation” gesture.

Mediaite columnist Joe Concha appeared as a guest, wondering aloud why Bashir hadn’t been suspended for on-air remarks like his colleague Alec Baldwin was for an off-air profanity-laced tirade.

“But let’s get some context here,” Cuomo pushed back. In return, Concha noted that it took Bashir three days to apologize.

“Okay, let’s talk about why did it take three days,” Cuomo asked. “That goes to what was the intention that Bashir had when he said this. Having read the full transcript of what it was, it seemed to have been a fairly well-developed reference to the history of slavery and how terrible it is and this was what was done to slaves; and if you want to use slavery, you should know what slavery was, and this is what should be done to you.”

“But he didn’t have to go that far,” Concha responded.

“And then it became just the last part of what he was saying should happen to her, which was this horrible thing that was done to slaves,” Cuomo noted. “Do you think Martin Bashir was trying to be viciously, savagely hurtful to Sarah Palin?”

“You don’t think he was trying to make a bigger rhetorical point and that this was just a mistake of how to do it?” the CNN host asked. Concha did not agree, suggesting the MSNBC host was simply “trying to get attention.”

After Concha demanded that Bashir either be suspended or fired, Cuomo and his co-host Kate Bolduan argued that Bashir’s apology suffices and came off as “heartfelt.”

“I will tell you this,” Cuomo added, “when I heard his apology, I thought it was the best media apology I’ve ever heard. I thought it made CBS’s Benghazi apology seem like a ‘maybe.’ I thought it was so unqualified — he tapped into the instincts that drove him to that level of rhetoric; the harshness that we all talk about in the media; that he became a manifestation of that and why that’s wrong. I think he went a really far way.”

[Editor’s note: The first graf and headline were updated to reflect that Cuomo did not outwardly defend Bashir’s remarks but rather offer context for the greater question behind them.]