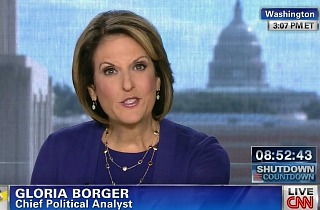 CNN’s Gloria Borger hit on something rather astute on Monday, though it is not clear that the point she made was the point she intended to make. Speaking with anchor Brooke Baldwin, Borger said that the GOP had muddled its anti-Affordable Care Act message by pursuing a strategy which could result in a government shutdown. She said that the tactics embraced by Congressional Republicans have prevented the media from focusing on the ACA’s failures. Borger is partly correct, but hers is merely the latest excuse for failing to cover “Obamacare’s” troubling rollout.

“I’m not quite sure they haven’t stepped on their own message,” CNN’s chief political analyst said of the House GOP after noting that she was unclear as to what the Republicans in Congress were trying to accomplish with this latest and likely ill-fated push against the ACA.

“There have been lots of problems with it,” Borger said of the ACA. But, then, in an attempt to identify any of the myriad problems the law’s implementation, she could only come up with only one.

“You know, you’re giving corporations a free ride, but individuals have to enroll,” She said.

“Small businesses now, they have to take more time to figure it out,” Borger added reaching for and failing to identify a second example.

This apparent lack of background knowledge leaves one with a sense of incredulity over Borger’s assertion that the press would adequately cover the ACA’s rollout problems in the absence of a shutdown fight. Nevertheless, she proceeds to make exactly that contention.

“If you wanted to highlight the problems, why not highlight the problems? Now, all we’re talking about is funding the government,” Borger insisted. “The Republicans really had an opportunity here to talk about what’s wrong with the president’s health care bill and try and fix it. And, instead, I think they’re caught up in this argument that many people think is kind of a non sequitur at this point.”

On Fox News Channel’s Media Buzz with Howard Kurtz this weekend, the panel guests took the media’s infatuation with Sen. Ted Cruz (R-TX) and how his faux filibuster has reframed the GOP’s case against the ACA as, essentially, a lost cause.

The National Review’s Jim Geraghty rightly observed that the press has been fond of covering the actions of Sen. Cruz far more than they have been in covering the ACA. “It’s a very simple story,” Geraghty said. “You don’t have to get into premiums. There’s no numbers involved.”

Even Kirsten Powers tacitly confirmed the critique on the media’s coverage of the ACA’s rollout by noting that “policy people” were covering it, but the subject lacked an element of sexiness which would help it translate to a broader audience.

This is not to say that, without a looming shutdown, the national political media would not be covering the ACA’s rollout week at all. There are examples of how they would cover the ACA provided by local press outlets around the nation.

One “Obamacare” story which made headlines last week was not the delay in the opening of online exchanges for business, not the flight of ACA “navigators” from the process, and not the likelihood that insurers plan to cut costs by reducing the number of doctors or hospitals in their networks. No, the local media outlets covered the news that, in some cases, insurance premiums are lower than the Congressional Budget Office originally projected.

That is good news – it is one of the few successes that ACA supporters can point to in the past few weeks. In the absence of Cruz’s filibuster-like performance and a fight over a shutdown, the media would most certainly be covering more of Obamacare than they are now. But to suggest, as Borger did, that the Republican message on the ACA would be uncritically covered by the national political press is hard to believe.