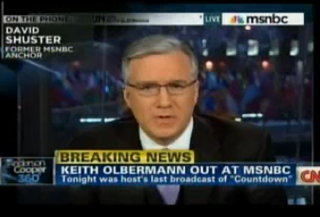 Last night earned its place as one of the most earth-shattering nights in cable news history– the longtime host of a cable news network’s flagship institution– the face, heart, and soul of the network– ends an eight-year run shrouded in mystery, leaving uncertain whether his departure was voluntary. Yet as fascinating as the sunset of Keith Olbermann‘s MSNBC career may be, the response from rival network CNN was no less intriguing. Trotting out an all-star panel led by Anderson Cooper, the network decided it was time to debut a talent whose involvement with them led him to a similar fate to Olbermann’s: departed MSNBC anchor David Shuster.

David Shuster’s MSNBC career, and particularly its end, can boast little parallels with Keith Olbermann’s aside from its ending. Many moons ago, Shuster– who at one time used to fill in for Olbermann on Countdown— was indefinitely suspended from MSNBC for, rumor has it, shooting a secret pilot program with CNN, something the former network treated akin to treason. MSNBC made abundantly clear that their actions towards Shuster were disciplinary, and Shuster kept his silence for many months, finally surfacing on Twitter and talk radio to explain that he had taken the time off to go back to school and work on a broadcast project of political significance (what that project actually is remains under wraps). He did not share in the type of spectacular goodbye from his network with which Olbermann chose to exit and, contract with MSNBC expiring in December, kept himself outside of the cable news sphere until last night, when he debuted on the network he was widely reported to have been in talks with when he was suspended.

Again, Shuster’s contract with MSNBC ended in December– that was what allowed him to return to Twitter and hit up talk radio. He had not found himself on television until last night. His praise for Olbermann was sky high, noting that he both “designed Countdown” and was “instrumental” in training many of the hosts the network has now, and to watch someone else take up the herculean challenge of manning the “incredibly well-oiled machine” that he is leaving at 8 PM would be interesting. Even in answering Cooper’s most difficult question– what people within MSNBC thought of Olbermann as a person– Shuster was gracious and told Cooper that Olbermann was beloved among his staff, a sentiment with which many once affiliated with MSNBC would surely beg to differ on. In light of all the rumors surrounding the office environment at the network, and others on the panel, notably Reliable Sources host Howard Kurtz, having researched and commented on the negative aspects of working with Olbermann, Shuster had enough leeway to be frank about any conflict he saw or experienced around Olbermann during his time there. He chose not to kick the man when he was down, however, and, in relation to Cooper’s comments lauding Olbermann’s talents, left the impression that there was much love on the CNN set for the former Countdown host’s abilities, a sort of olive branch– or at least open hand– to the fallen host.

His phone-in appearance with Anderson Cooper last night felt more ad-hoc than anything deliberate; after all, CNN, like every other media outlet, had no way of knowing Olbermann was to leave Countdown last night; there was no room for calculated media moves on their part (or anyone else’s, for that matter). Yet the history between Shuster and the network– especially given that their potential union was the last many people had heard of Shuster at all– outwardly clouded his presence there. Yes, his insight was valuable and there were reasons far beyond sending any signal to have him contribute, but his glowing praise of Olbermann, coupled with some of the kind words from others on the panel, couldn’t help but arouse suspicion about Olbermann’s future. Sure, RedState.com’s Erick Erickson laughed at the news of Olbermann’s departure, and Kurtz called the move “not surprising” and noted that Olbermann had launched a “virtual war” inside his company, but Shuster was not alone in his graciousness. Anderson Cooper noted that Olbermann “put MSNBC on the map” and that, while he found it “unusual to have that level of drama behind the scenes,” “talent finds a way.”

The CNN panel concluded that, whatever the end of Countdown may mean, it certainly didn’t mean the end of Olbermann’s broadcast career. That said, it is difficult to predict where the host would go. The laundry list of reasons Fox News would not hire him could go on forever, and even a place at CNN seems questionable– though now, more than ever, relocating there would make more sense than ever before. CNN’s 8 PM hour, while harboring a program in its infancy, is flailing. They need the ratings boost, as apprehensive as they may be of the impending corporate headache. They’ve already given another MSNBC refugee a platform (though how often, if at all in the future, Shuster will make appearances is yet unknown), and made that point the highlight of their coverage. Speculation is speculation at this point, but one can’t help wonder if the powers-that-be at the network are at least considering the idea, and if they are, Olbermann at a third network would mean a seismic shift in the cable news landscape as we know it.

Below is the second segment Cooper did with Shuster, Erickson, Kurtz, Ali Velshi, Bill Carter, and Roland Martin. Parse the narrative as you see fit: