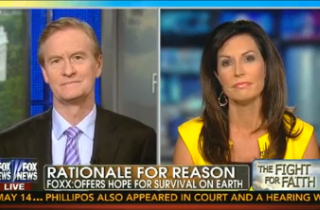 Meet Penny Nance. She’s really concerned. How concerned? Well the Concerned Women for America CEO appeared on Fox & Friends this morning to decry the horrific fact that Charlotte Mayor Anthony Foxx would dare proclaim May 2nd as a “Day of Reason” in addition to the widely-recognized “Day of Prayer.”

“You know, G. K. Chesterton said that the Doctrine of Original Sin is the only one which we have 3,000 years of empirical evidence to back up. Clearly, we need faith as a component and it’s just silly for us to say otherwise,” she said. But she didn’t stop there. Clearly offended and disgusted by the notion that a governing official would have the audacity to recognize “reason” as a large factor in the improvement of humanity, she brought out the big guns, targeting straight for the origins of “reason” itself:

“You know, the Age of Enlightenment and Reason gave way to moral relativism. And moral relativism is what led us all the way down the dark path to the Holocaust […] Dark periods of history is what we arrive at when we leave God out of the equation.”

Take a moment and let that sink in. This concerned cable news guest from a widely-known Christian conservative organization just demonized “reason” and the Age of Enlightenment — widely regarded as the era directly responsible for inspiring the scientific progress that made the industrial revolution and the rapid betterment of human life possible — because it “led” us to the Holocaust. Therefore, we should be very upset with this big, bad Foxx mayor guy because he’s a newly-minted Obama cabinet member who dares suggest reason deserves a special place alongside prayer.

Keep in mind that her bafflingly narrow-minded view of history and demonization of “reason” ignores many key points:

1) The Enlightenment brought us what’s known as the Declaration of Independence and the Bill of Rights. Two things of which it’s not hard to imagine Nance is a “fan”? The Enlightenment inspired people like Thomas Jefferson and Thomas Paine to reject the supernatural aspects of religion in favor of a reconciliation of science with their faith in some sort of creator — something called “deism.” This was all part of a greater overall shift towards liberty, republicanism, and religious tolerance. Ugh, hate that stuff so much.

2) Scientific progress and the betterment of life for the millions of humans on earth was dependent on the curiosities that arose from the “Age of Reason.” Without that era of mankind, you likely wouldn’t have had things like the steam engine, electricity, modern medical procedures, life-saving vaccinations, etc.

3) All of that godless scientific progress liberated much of mankind from a life of squalor. And those effects are still being felt today. Before Enlightenment, the majority of mankind lived in filthy conditions that represented a flat-lined graph of health/prosperity for centuries beyond centuries. And then something magical happened: SCIENCE. To wit, compare the “wealth and health” of all nations in 1800 versus today (data via the wonderful Hans Rosling):

Ugh, reason and science and stuff. Always leading to vast improvements in life expectancy and prosperity.

3) Literacy. The Age of Enlightenment and the curiosities it inspired led to a consumer demand for things called books — you know, those things that people read that often isn’t just The Bible. As a result of this new consumer demand, rapid expansions in book-printing technology led to astounding increases in something called literacy.

Throughout the developed world, millions of children began to read at an early age; newspapers, magazines, and books became widely available for the first time in history, leading to cultural developments and more open societies. To this day, the cycle continues: impoverished people’s lives are improved by technological devices which free them from hours of backbreaking labor and allow them time to invest in things like education and literacy.

As for Nance’s breathless claim that when “you take God out of the equation,” you undoubtedly end up with “dark” periods like the the Holocaust: I don’t recall Thomas Edison inventing the lightbulb out of faith in God. I don’t remember the washing machine — a simple appliance that has liberated millions from labor and allowed them time to learn — being invented because of faith in God. If I have my facts correct, those and many other life-altering inventions (like modern medicine) came about due to something called science and literacy, direct outgrowths of that pesky li’l thing we call “reason.”

It’s funny. I can’t quite remember any atrocities committed in the name of God. I’m really having a lot of difficulty finding any examples of such things. But when I do find those examples, perhaps then I can make an overwrought, broad-stroked claim demonizing Nance’s Christian faith because, after all, religion itself led to those difficult-to-find crimes against humanity, right?

Watch below for maximum forehead-smackery, via Fox News: