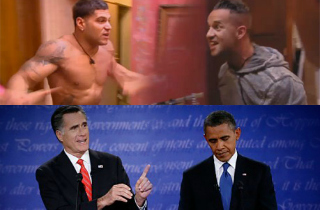 Once upon a time way back in the 20th Century, MTV had a rule stating cast members of the Real World weren’t allowed to resort to physical violence when settling house conflicts. If any situation did come to blows, the guilty party would be kicked off the show (as we all remember, this happened in Season 19 on Real World Sydney when Trisha smacked Parisa).

How times have changed…

Now, shows like Jersey Shore merrily allow cast members to strike each other (or any member of the population for that matter). And the policy change has paid off: The highest rated Jersey Shore episodes have involved some kind of war at the shore (or Italy). Even this week, you had a girl (JWoww…who is 26 going on 46 thanks to Botox-gone-bad) landing a nasty right-cross on her own fiancé.

The more vitriol and brawls, the bigger the cash cow. Just ask the producers of The Real Housewives…

Flip the channel to CNN, FOX News and MSNBC, and the result is the same, albeit on a verbal-only level (for now).

CNN is the most civil and therefore the lowest rated. A few years ago, MSNBC used to trail CNN by a little in the ratings and FOX News by an ocean, but since making the decision to go with hard left, in-your-face opinion journalism from the likes of Rachel Maddow and Lawrence O’Donnell, the once-unthinkable has happened: Periodic ratings victories (in the demo) over Sean Hannity and Greta Van Susteren, respectively.

The first Presidential debate saw Mitt Romney playing the role of The Instigation (Thrice-removed Uncle of The Situation), turning in a hard-hitting performance versus a disengaged President Barack Obama (who acted like the actual Situation the morning after too many Red Bull and vodkas at Karma). The result was a resounding race-changing victory for Romney, but if you ask the average person on the street what policy or stance Romney articulated to help him win said debate, you’d be hard-pressed to find something beyond, “Well, he looked Presidential” and “He looked Obama in the eye.”

It’s not an election, it’s American Idol. There’s even voting (flash polls) afterward to tell you who won, just like on TV.

One week later, the VP debate saw a classic case of overreaction by Joe Biden. Most to the right of Chris Matthews agree that Biden alienated centrists and angered Republicans (who are fired up enough) with all the chuckles, wide smiles and 85 interruptions (ABC’s count) witnessed that night. But a majority of Democrats loved the performance, have praised Biden’s energy, and now see challenging every GOP point by calling it a lie as a winning template the President in round two with Romney.

Adding it all up, we have an American public that loves confrontation on its reality shows. And we have cable news networks that yearn for a good brawl as well. But when it comes to picking a President, voters may not want the highest offices in the land populated by those who act as petulant as Snooki at closing time.

If he acts like Biden did in Kentucky, it will be seen as an obvious case of showmanship. The average voter, one who doesn’t live in the bubble we as journalists and cable pundits live in, won’t really know WHO the real Obama is…

The affable guy on The View?

That, um, reserved fellow from the first debate?

Or the antagonist so many in his party wants him to be?

After reading Bob Woodward’s The Price of Politics, a magnificent look inside debt reduction negotiations between the White House, Democrats and Republicans, it’s fairly certain that Obama won’t be able to pull off option #3 (antagonism). Woodward, through interviews with all the players (including Obama) and actual meeting minutes shared throughout the book, makes it clear: The President simply does not like confrontation.

Perhaps Obama could play that kind of combative role as a challenger (when there’s no record to defend), but solely going after Romney for what he might do if elected likely won’t do much when swaying independents. A positive agenda for the next four years and specifics on how to get there will be what keeps the President competitive, not a bar brawl.

Like Biden, we can expect the President to broach a percentage between 46 and 48 on a few occasions Tuesday night. But one month after the damning tape of Romney describing campaign strategy went public, will bringing it up now really have the same impact?

The scenario is reminiscent of the Seinfeld episode where George (chowing down on seafood) is insulted at a sales meeting by a co-worker (“Hey George, the ocean called; they’re running out of shrimp.”) and can’t find a comeback. By the time thinks of one, (“Well, the jerk store just called, and they’re running out of YOU!”), a retort to the retort has already been concocted by his nemesis: “”What’s the difference? You’re their all-time best seller.”

In other words, the President had his chance in Denver to remind the 70 million watching of the Romney remark and didn’t grab the opportunity. To do so now would be as effective as an A-Rod at-bat in the postseason. Besides, Romney (like Ryan) will be ready.

Peggy Noonan, a former Reagan speechwriter who has been no friend to Romney throughout this campaign cycle, summed up the Obama/Biden debate performance up best: “For the second time in two weeks, the Democrat came out and defeated himself. In both cases the Republican was strong and the Democrat somewhat disturbing.”

Which reality show will be on display Tuesday night?

Or a well-mannered exchange of ideas to an electorate that simply wants to know (without spin) what each candidate has planned for the next four years if elected?

The pundits and cable networks in the bubble want the former.

The public wants the latter.

Which side the President decides to appease is the big question.