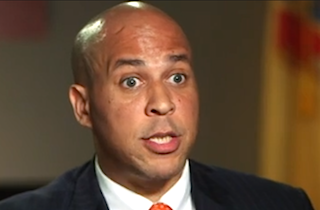 Senators Cory Booker (D-NJ) and Rand Paul (R-KY) have made news over the last year for actually forming a legitimate bipartisan alliance on the issues of drug decriminalization and criminal justice reform. And in a new interview for CNN’s latest Weed documentary, hosted by Dr. Sanjay Gupta, Booker echoes a point Paul made recently in reference to Jeb Bush.

“Let’s stop the pot hypocrisy,” Booker told Gupta. “We now have had three presidents that have admitted to smoking marijuana. People that are in public office all throughout the Senate have said, hey, I’ve smoked marijuana recreationally.”

“How much of a hypocrite do you have to be to say that I broke American laws using pot as a recreational thing and that I’m not going to support this idea that as a medicine for severely sick people, that they shouldn’t be able to access this drug?” he asked.

During an interview earlier this year, Paul said of Jeb Bush, “This is a guy who now admits he smoked marijuana but he wants to put people in jail who do.”

“I think that’s the real hypocrisy, is that people on our side, which include a lot of people who made mistakes growing up, admit their mistakes but now still want to put people in jail for that,” he added. “Had he been caught at Andover, he’d have never been governor, he’d probably never have a chance to run for the presidency.”

Weed 3: The Marijuana Revolution premieres this coming Sunday at 9 p.m. ET on CNN.