Dan Savage Goes Off on Cheneys, Baldwin, and ‘Kiddy-F*cking Catholic Priests’ with Maher 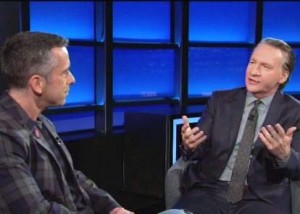 Dan Savage joined Bill Maher Friday night for a no-holds-barred talk about all the gay news happening in the world, and Savage was his usual unrestrained self, going off on the “dykes” in the Cheney family and saying he’s getting sick and tired of “kiddy-fucking Catholic priests” lecturing everyone else about morality and the welfare of young children.

On the subject of the Cheney family civil war, Savage did not let the openly-gay Mary Cheney off the hook for defending gay rights against her sister because he was still pissed off that she donated money to anti-gay politicians and said nothing when her father ran on a ticket in 2004 that was pushing anti-gay referendums in a number of different states.

They went down the line of more people they considered conservative hypocrites (including Megyn Kelly, whom Savage said only supports maternity leave “after she pushes out a brat) before they tackled the big liberal elephant in the room: Alec Baldwin. Savage was hesitant to condemn him, arguing that Baldwin was someone who grew up in a bygone era where homophobic slurs were considered the norm, and so when his temper gets the better of him, he lets a few fly.