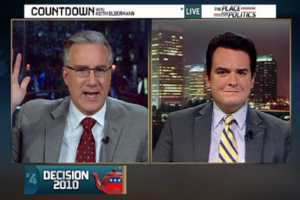 The strife between Republican establishment candidates and their Tea Party rivals continues as the Republican Congressional leadership warns that it may not support a complete government shutdown. To Keith Olbermann, it’s a sign that, even if they do win in November, the infighting will render the Republican Party unable to govern. To his guest, Slate blogger Dave Weigel, it’s more proof that “Tea Party candidates can do no wrong.”

Earlier in the week, Rep. Eric Cantor suggested that it was possible the Republicans would not be seeking a government shutdown if they take the majority in Congress, lest they be seen as a “bunch of yahoos.” A bunch of said yahoos, namely the Tea Party Patriots, took objection to this needless attack and insisted that every option must be on the table, including closing down for business. Tea Party candidates like Alaska’s Joe Miller are caught in the crossfire, but many, like Nevada’s Sharron Angle, also seem to benefit from the opposition.

Olbermann, in dire spirits about the whole thing, asked Weigel to give his take on the rift on the right. His view seemed much more optimistic, arguing that the Tea Party candidates feed off of ridicule and negative attacks from sources that were typically considered mainstream. With the Republicans almost certain that they will win in November, the only problems left to solve are those presented by “the coming infighting”:

“There’s really nothing that a Tea Party candidate can do wrong if they’re irritating the establishment. if Christine O’Donnell cuts an ad that seems to the rest of us seem ridiculous, its proof that the establishment is missing the point. If Joe Miller says something that Mitch McConnell walks back, it proves that Joe Miller is a straight talker and Mitch McConnell is not. And this is another example– the fact that everyone around Sharron Angle says she can’t hack it is proof that she can hack it… or something.”

The discussion from last night’s Countdown via MSNBC below: