David Axelrod on RNC ‘Smile’ Swipe at Hillary: ‘She Did Look Irritated’
Opinion

David Axelrod on RNC ‘Smile’ Swipe at Hillary: ‘She Did Look Irritated’ 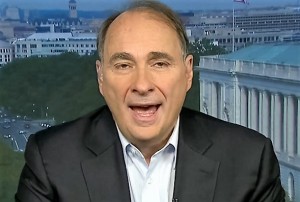 Many people saw Republican National Committee Chairman Reince Priebus‘ criticism of former Secretary of State Hillary Clinton’s alleged failure to smile at Wednesday night’s MSNBC forum as both inaccurate and sexist, but Priebus found an unlikely ally in former Obama administration chief adviser David Axelrod. On Friday morning;s New Day, Ax conceded that Hillary was treated differently than Trump, but doubted it was because she’s a woman, and while he agreed Priebus was foolish for critiquing Hilary’s demeanor, it wasn’t because it was sexist, or even untrue (emphasis mine):

I think that she was treated differently than trump was treated, whether or not it was because she is a woman, I think it is another question. I don’t think that it is helpful to her if her supporters beat that drum too loudly each time she is criticized. I thought that Priebus was foolish to use that formulation. She did look irritated in that particular half hour, and she had a reason to be irritated, because so much of it was devoted to one issue. But you know, to put it in those terms, probably was a misjudgment on his part. He opened himself up to that kind of criticism.

As a matter of fact, though, Hillary smiled almost twice as often as Trump did, and when given the opportunity to slam Priebus for his obvious sexism, she declined:

I’m going to let all of you ponder that last question. I think there will be a lot of Phd. theses and popular journalism writing on that subject for years to come. I don’t take my advice and I don’t take anything seriously, that comes from the RNC. We were talking about serious issues last night. I know the difference between what we have to do to fix the VA, what we have to do to take the fight to ISIS, than just making political happy talk. And I had a very short window of time in that event last night to convey the seriousness with which I would approach the issues that concern our country. Trump chose to talk about his deep admiration and support for Vladimir Putin. Maybe he did it with a smile, and I guess the RNC would have liked that.

The sexism inherent in this criticism is, of course, a matter of opinion, but Axelrod’s suggestion that Hilary’s supporters charge sexism “each time she is criticized” is offensive and inaccurate, and his dual warnings, to those supporters not to charge sexism, and to Priebus not to “open himself up” to what Ax says is illegitimate criticism, are revealing.