Donald Trump Praises Obama For Playing Golf With Boehner: ‘It Is An Amazing Game’ 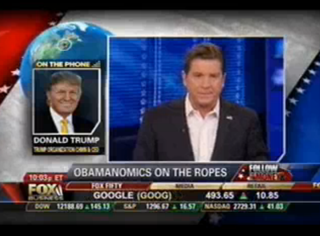 Donald Trump, the former frontrunner in the 2012 Republican race until The Apprentice seduced him away, is still happy to chat about politics and give his perspective, and still pushing most of the views that brought him to prominence early in the year. But tonight, while still going strong against President Obama’s foreign policy, Trump had praise for the way the President handled at least some of his business: by doing it on the golf course.

Trump was Eric Bolling‘s first guest on tonight’s Follow the Money, where he discussed the economy and his perspective on the free market, as well as the current budget fight in Congress. On energy, Trump stuck mainly to the script he has had for the past few months, arguing that “China has been eating out lunch,” partly due to the fact that they are “going heavy into coal, whereas the environmental restrictions make it almost impossible for us to do the coal thing anymore” despite the United States being “the Saudi Arabia of coal.” He also noted that America has invested little in natural gas and other alternative sources of fuel besides oil, and that this would ultimately lead to serious economic problems if the nation doesn’t end its dependency on oil.

Bolling then asked Trump to give President Obama some advice going into the budget talks and beyond. Trump’s advice was simple: “the President has to do it himself.” One such example of “doing it himself” that Trump noted positively was the golf game President Obama played with House Speaker John Boehner. “The golf little [sic] match that they had was not so bad a thing– golf is an amazing game, you get friendly with people,” he explained. He noted that many of his friends called him to bash the President for the move, but that he thought it was “great.” “You get friendly with people on a golf course like you can’t anywhere else,” Trump explained, suggesting that personal relationships help foster good politics outside of the halls of power.

Capping off his effusive praise for the President’s golf initiative, Trump reiterated that “I’ve lost so much confidence in the people on the Republican side,” part of the reason he declined to campaign for the Republican nomination.