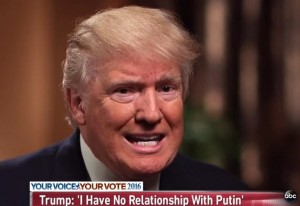 Republican presidential nominee Donald Trump tried to put to rest questions about his relationship with Russian dictator Vladimir Putin, but on Sunday morning’s edition of This Week with George Stephanopoulos, was repeatedly unable to categorically say whether he had ever met Putin, and when pressed by host George Stephanopoulos about whether he had a “relationship” with Putin, seemed to respond that it depends what your definition of “relationship” is:

STEPHANOPOULOS: Let’s talk about Russia. You made a lotta headlines with Russia this week. What exactly is your relationship with Vladimir Putin?

STEPHANOPOULOS: Well, he was in Moscow.

TRUMP: –and I was shot in New York.

STEPHANOPOULOS: You were in New York. But that’s the thing.

TRUMP: No, just so you understand, he said very nice things about me. But I have no relationship with him. I don’t– I’ve never met him–

TRUMP: I had– no, I– look. What– what do you call a relationship? I mean, he treats me–

STEPHANOPOULOS: You would know it if you did, wouldn’t you–

STEPHANOPOULOS: Never spoken to him on the phone–

STEPHANOPOULOS: Never spoken to him on the phone?

TRUMP: I have never spoken to him on the phone, no. I’ve spe– I’ve spoken– when we had the Miss Universe contest a number of years ago, we had Miss Universe in Moscow, in the Moscow area. He was invited. He wanted to come. He wasn’t able to come. That would’ve been a time when I would’ve met him.

STEPHANOPOULOS: But– I– I just wanna clear this up. Because you did say, on three different occasions, you had a relationship with him. Now you say there’s none.

Trump’s “relationship” with Putin, whatever it is, has raised questions about the Russian government’s involvement in trying to influence the presidential election.