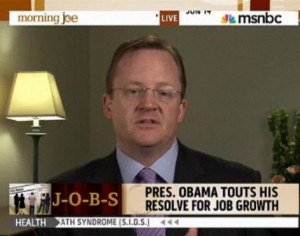 A little over four months after stepping down as White House Press Secretary, Robert Gibbs stepped back into the spotlight Tuesday morning for a spot of Morning Joe. Discussing Monday night’s CNN Republican primary debate, Gibbs took a few well-placed shots at contenders Mitt Romney and Tim Pawlenty, declared Michele Bachmann the victor, and talked about some of the challenges that President Obama faces in his reelection bid. Given his skills with a political knife, it was a soft rollout of Gibbs 2.0.

Gibbs took only brief shots at the GOP field, noting that they preferred to “hit the President,” rather than talk about their own records. “Given Mitt Romney’s job creation record in Massachusetts,” Gibbs said, “or Tim Pawlenty’s record of leaving a $6 billion deficit in Minnesota, I wouldn’t want to talk about my record on that, either.”

The balance of the segment dealt with the challenges that President Obama faces in turning the economy around, and toward the end, a little glimpse into Gibbs’ use of his rare down time.

Gibbs’ re-emergence as a surrogate for the President underscores the strategy behind the selection of Jay Carney as Gibbs’ successor. Carney has sealed up the messaging from the press office like a CDC lab, raising the art of not making news to Picasso-esque levels. While frustrating to beat reporters, it cuts unforced errors to a minimum, and clears the way for people like Gibbs, David Axelrod, and Bill Burton to do the heavy lifting for Obama’s reelection.