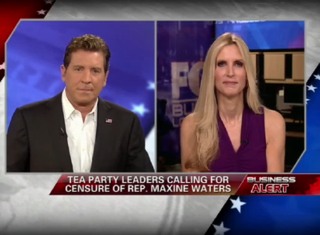 Rep. Maxine Waters‘ town hall rhetoric against both the President and the Tea Party has been garnering her headlines, particularly on the right, since telling the latter to “go straight to hell” in front of a crowd. On last night’s Follow the Money, however, Eric Bolling not only challenged the appropriateness of the words, but the origin of that sentiment, asking guest Ann Coulter whether the “vitriol” was a product of Rep. Waters’ racism.

Bolling opened the segment with Rep. Waters’ comments, followed by a reminder that the Congresswoman “is under Congressional investigation for funneling TARP funds to a bank [her] hubby had a substantial investment in.” He then turned to Coulter for her assessment of the matter, and she found a good deal of the situation to be a positive for the Tea Party, as it proved the Democrats were afraid of them. “They are people paying attention to politics, and that is very dangerous to the Democrats,” she argued.

Even among the Democrats, however, Bolling countered that he found Rep. Waters’ “hatred” and “vitriol” to stand out, which prompted Coulter to remind him that Rep. Waters had defended several of the more violent actors during the Los Angeles riots in the 1990s. This, in turn, led Bolling to ask: “the anger against the Tea Party… is this racism?”

After a long “um,” Coulter responded that it was an “interesting question– considering all of the things that have been called racism in the last couple of years, I’d say this registers higher on the racism Richter scale than, oh, talking about the big black cloud of debt hanging over our economy.” That said, she refused to call it racism, as she was by nature “slow to cry racism,” but deigned it “absolutely vulgar and absolutely typical of Maxine Waters.”