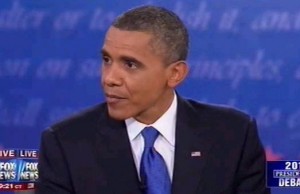 Perhaps the most meaningful exchange in Monday night’s foreign policy debate focused on that hot spot known as the People’s Republic of Ohio, the key battleground state most impacted by President Obama‘s auto rescue. The President and Republican nominee Mitt Romney got into a heated exchange over Romney’s repeated advice to “Let Detroit Go Bankrupt,” with both candidates urging voters to check the record to see who was telling the truth. On the style and the substance, President Obama won the point without contest.

The President opened by attacking Gov. Romney over his investments in companies that ship jobs to China, a note he hit all night like a Morse code operator. He quickly moved on to Detroit, saying “If we had taken your advice, Governor Romney about our auto industry, we would be buying cars from China, instead of selling cars to China.”

Romney lost style points by whining “I just want to take one of those points, again, attacking me is not talking about an agenda for getting more trade and opening up more jobs in this country,” then moved to defend his statements on the auto rescue. “The president mentioned the auto industry and somehow I would be in favor of jobs being elsewhere. Nothing could be further from the truth. I’m a son of Detroit. I was born in Detroit. My dad was head of a car company. I like american cars.”

This, by the way, was a near-verbatim recitation of the third paragraph of his infamous op-ed. Authenticity!

“My plan to get the industry on its feet when it was in real trouble was not to start writing checks,” Romney continued. “It was President Bush that wrote the first checks. I disagreed with that. I said these companies need to go through a managed bankruptcy, and in that process they can get government help and government guarantees, but they need to go through a bankruptcy to get rid of excess cost and the debt burden that they had built up.”

“Governor Romney that’s not what you said,” President Obama cut in.

“You can take a look at the op-ed. I am still speaking,” Romney snipped. “I said we would provide guarantees and that what is what was able to allow these companies to go through bankruptcy, to come out of bankruptcy. Under no circumstances would I do anything other than to help this industry get on its feet. And the idea that as has been suggested that i would liquidate the industry, of course not.”

On the key question of whether Mitt Romney recommended government help to “go through bankruptcy,” Mitt Romney is wrong. In his op-ed, he only referenced post-bankruptcy loan guarantees:

The federal government should provide guarantees for post-bankruptcy financing and assure car buyers that their warranties are not at risk.

That’s A) not the same thing as a loan, and B) not helping them “through bankruptcy.” Without bridge loans from the government, there was no private capital available at the time to get them through bankruptcy, and even those commies at The Economist agree there would have been some liquidation. Romney’s plan was, essentially, to let the car companies crash hard enough to kill off retiree benefits and decent-paying jobs, then let some private financiers, with government guarantees, waltz in and buy the bones on the cheap.

To the extent that this debate makes any difference at all in this election, it will be in how this exchange is played, and replayed, in Ohio.