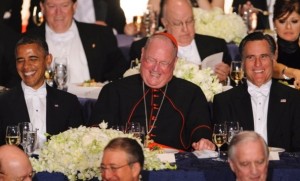 They say “dying is easy, comedy is hard,” but explaining comedy is just plain deadly. On Thursday night’s The Last Word, host Lawrence O’Donnell and panel were handed the thankless task of (over)-analyzing the comedy stylings of President Barack Obama and Republican presidential candidate Mitt Romney at this year’s 67th annual Alfred E. Smith Memorial Foundation Dinner. O’Donnell was not pleased with Gov. Romney’s ratio of jokes targeting President Obama, versus those at his own expense, but a check of the transcripts for the 2008 Al Smith Dinner shows a similar performance from a certain upstart Senator.

O’Donnell’s general critique of Mitt Romney’s set was that it wasn’t in keeping with the apolitical, self-deprecating vibe of the dinner, while President Obama’s speech was much more in keeping with the spirit of the event. Romney’s crack about President Obama and Cardinal Timothy Dolan sharing the dais “despite their differences” was below the political belt, and his on-the-square delivery of the “slight improvement” setup to his unemployment joke seemed like a real attempt to diminish September’s jobs numbers, but beyond those (admittedly subjective) examples, the rest of Romney’s set consisted of fair game. Both candidates delivered on the most important metric: they were funny. Mitt Romney’s uncomfortable-in-his-own-skin delivery made the material more funny, and President Obama, as O’Donnell noted, mined self-deprecation to great effect.

Lawrence also took issue with the scorecard, as he saw it, which showed Mitt Romney making 8 jokes at President Obama’s expense, to only 3 Obama jokes at Romney’s expense. It’s fair to argue that self-deprecation is the more effective means to enhance a candidate’s likability, but the notion that there’s an expected ratio at these events isn’t really true. The Al Smith Dinner is one of many such dinners, like the Gridiron Club Dinner, the Alfalfa Club Dinner (which honors the birthday of Confederate General Robert E. Lee), and a raft of press club dinners that culminate with Nerdprom. As Rachel Maddow noted last night, the Al Smith Dinner is the only one of these that falls smack in the middle of a presidential election, but they all have the same roast-like vibe, and participants don’t always stick to self-deprecating humor.

Case in point: the 2008 Al Smith Dinner, at which then-Senator Barack Obama leveled a full dozen shots at the McCain/Palin ticket. Republican then-nominee Sen. John McCain returned fire about eight times (it’s tougher to judge where some of his jokes landed), which isn’t quite the same as the Romney/Obama ratio, but in the ballpark.

While both 2008 candidates also did a lot of self-deprecating humor, then-Sen. Obama did jokes at his own “expense” that were mostly about how much everybody loved him (remember that?). Perhaps Lawrence has uncovered a dynamic that future DC rubber chicken circuit historians can study. In 2008, even though there was no incumbent, Barack Obama was seen as the challenger, the one with something to prove, whereas this year, it’s Mitt Romney taking on the now-established President Obama.

There’s one other Al Smith Dinner skeleton in Lawrence O’Donnell’s closet. In 2005, The West Wing did an episode entitled The Al Smith Dinner, and although O’Donnell didn’t write that episode, he was credited as Executive Producer. See if you can tell me what’s wrong with this picture, featuring Jimmy Smits‘ Democratic nominee Rep. Matt Santos negotiating debate terms with Alan Alda‘s GOP Sen. Arnold Vinick just before they’re introduced at the Al Smith Dinner: 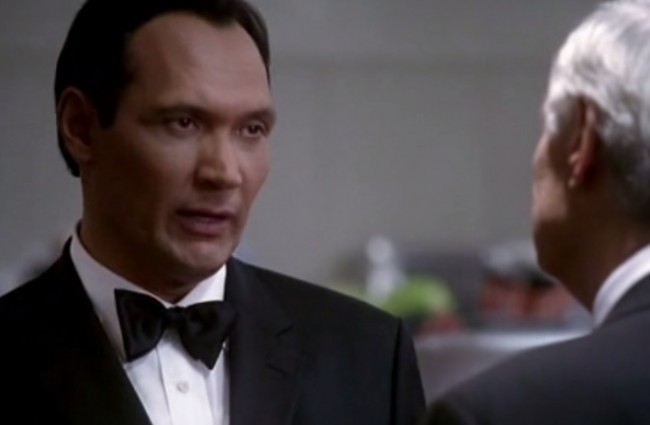 If you guessed that the Al Smith Dinner is a white tie affair, and Santos and Vinick are both wearing black ties, you win. Apparently, “white tie” is the Defcon 1 of formal occasions, whereas “black tie,” the kind of occasion most of us still have to rent a tuxedo for, is actually for the unrefined slobs of Eliteville. Hell, I’m usually on the fence if an invitation specifies “socks.”

O’Donnell and The West Wing do have a fig leaf, though, as they can always claim their costume choice was a tribute to JFK, who wore a black tie to the 1960 Al Smith Dinner.

In case you missed it, here’s The Last Word’s last word on the dinner: