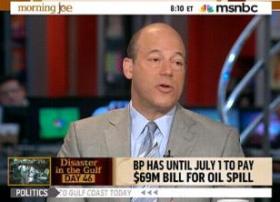 Former press secretary to George W. Bush Ari Fleischer has had some tough jobs since he’s left the administration (defending the BCS, Mark McGwire and Tiger Woods to name a few), so he was a good choice to lend a helping hand to Pres. Barack Obama, who is currently undergoing a crisis of optics in the wake of the BP disaster.

Fleischer’s advice? Be yourself.

During a lengthy Morning Joe appearance this morning, Fleischer gave his take on what the President has done right:

He’s himself. He is not an emotional President. And I think it was one of the strengths he had in the campaign. He was cool, people thought he was collected. And now at a time of crisis where emotion is important, it’s just not him.

This contrasts Fleischer’s former boss – who was more emotional but less cerebral. But Fleischer’s advice is to stick with the plan. “You’ve got to be yourself as a President,” he said. “The worst thing he can do is pretend to be somebody else.”

This comes on the day Pres. Obama again delayed a trip to Indonesia and Australia to deal with the oil spill crisis. This idea, warns Fleischer, may come back to hurt him. “This corner won’t be turned until this well is capped,” he said. “That’s his problem. He just grounded himself. He cannot leave America until that well is capped.”

Joe Scarborough then engaged Fleischer in a little improv exercise, playing the role of Pres. Obama. It didn’t go well.

Fleischer’s presence as a cable news talking head – he appears across all outlets – is a welcome site. Is he partisan? Of course, but he’s also cool and collected like he describes our current President. Fleischer and Eliot Spitzer for the new CNN Crossfire?

Check it out (mostly after the 3-minute mark):