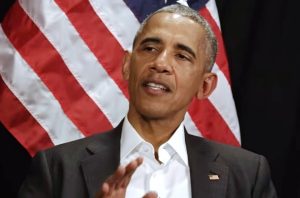 Fox Business Network used a deceptively edited clip of President Barack Obama Monday to argue that the president encouraged illegal immigrants to vote, when in fact he had done nothing of the sort.

FBN host Stuart Varney reported on story that he complained was getting “no media play at all, except here.” Varney played a clip of a November 4 interview with millennial Latino outlet mitú in which Obama “appears to encourage illegals to vote, and he promises no repercussions if they do.”

Here’s the transcript of the clip aired by Fox Business:

HOST GINA RODRIGUEZ: Many of the millennials, Dreamers, undocumented citizens — and I call them citizens because they contribute to this country — are fearful of voting. So if I vote, will immigration know where I live? Will they come for my family and deport us?

OBAMA: Not true… The sanctity of the vote is strictly confidential…

As it turns out, there’s a reason no other networks were covering the story: it isn’t accurate. Here was the full exchange, with the bolded parts representing the sections of the interview Fox Business edited out.

RODRIGUEZ: Many of the millennials, Dreamers, undocumented citizens — and I call them citizens because they contribute to this country — are fearful of voting. So if I vote, will immigration know where I live? Will they come for my family and deport us?

OBAMA: Not true. And the reason is, first of all, when you vote, you are a citizen yourself. And there is not a situation where the voting rolls somehow are transferred over and people start investigating, etc. The sanctity of the vote is strictly confidential in terms of who you voted for. If you have a family member who maybe is undocumented, then you have an even greater reason to vote.

As you can see, Obama made it perfectly clear that he was talking about the rights of Latino citizens to vote, and clearly differentiated them from undocumented immigrants. He was not saying that illegal immigrants could vote without repercussions, but that the legal relatives of those immigrants could so so. The worst you can say of Obama’s answer is that he misunderstood the question.

Obama continued, in a section of the interview excised entirely by Fox Business:

OBAMA: People are discouraged from voting and part of what is important for Latino citizens is to make your voice heard, because you’re not just speaking for yourself. You’re speaking for family members, friends, classmates of yours in school…

OBAMA: …who may not have a voice, who can’t legally vote. But they’re counting on you to make sure that you have the courage to make your voice heard.

Again, Obama is abundantly clear that he’s only talking about legal immigrants, and went out of his way to say that illegal immigrants cannot legally vote.