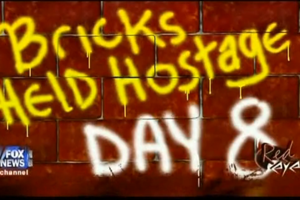 Last night, late-night Fox News watchers were notified of an unsolved crime caper in the News Corp building. Eight days ago, the artificial brick walls that previously adorned the studio of serious news program Red Eye were torn away from their natural habitat, not to be seen by their friends and family again. The suspect? “An unidentified white male in his 40s,” armed with what authorities “believe is a piece of chalk.”

The Fox News alert, delivered by Andy Levy, told the story of the missing brick walls—which Levy claims are actually still in the same studio—and the man responsible for keeping them hostage: Glenn Beck. “His demands are yet unclear,” Levy reported, leading directly to a press conference by the brick wall’s mother, who demanded her children be returned to her immediately. Needless to say, the suffering was palpable as she pleaded: “please, whoever you are, I don’t know why you did this… I promise I’ll listen to you and help you get whatever help you need.”

To be honest, we’re not entirely sure why Glenn Beck did this either—his new set is seriously lacking aesthetically, especially compared to his old space-age one with the shiny tables, and the brick walls look much more at ease giving the Red Eye set its casual ambiance rather than making the Glenn Beck set look more like a classroom than a TV studio. It appears the longer he keeps the bricks hostage, the bigger the punishment, however, as the wall matriarch warned that she would like to see the bricks returned so as to make sure no one gets hurt– not even him.