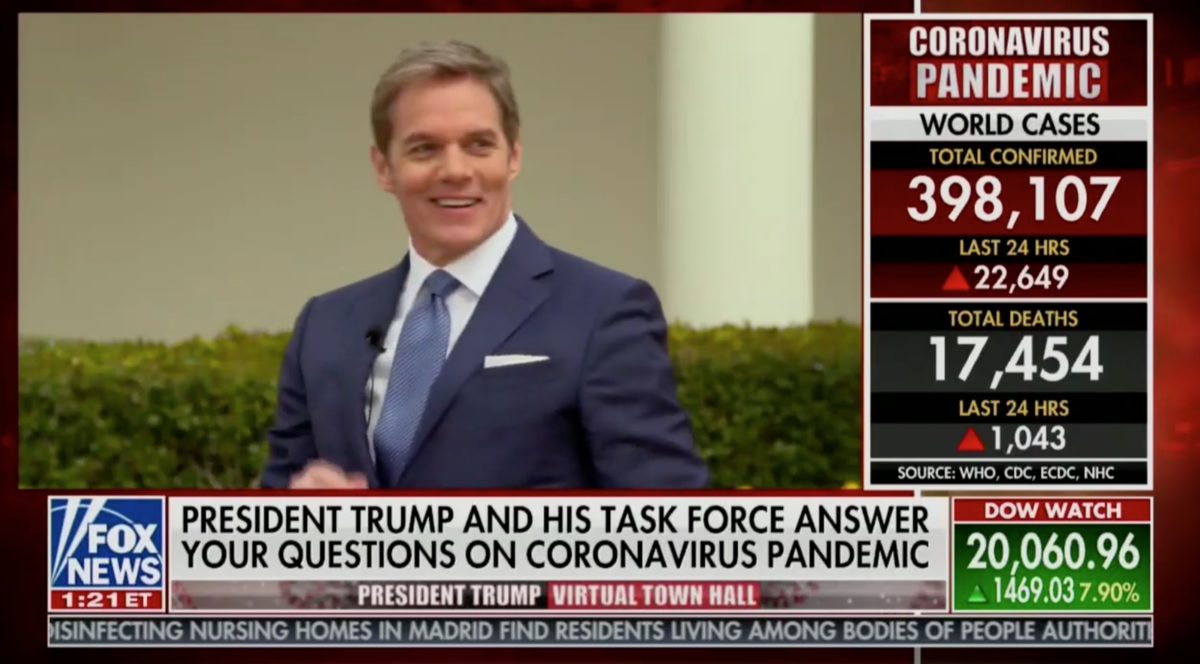 Fox News was scorched Tuesday for the lengthy town hall the network conducted with President Donald Trump on the coronavirus.

Fox News anchor Bill Hemmer conducted the interview alongside Harris Faulkner and several other Fox personalities, with the discussion focused on how the country moves forward — from a economic and public health perspective — despite the ongoing coronavirus pandemic.

Throughout the town hall — an impressive undertaking that was organized by Fox News within a day and featured various members of the coronavirus task force — Trump peddled misinformation about the crisis, misleadingly compared the coronavirus to the flu, claimed there would be thousands of suicides if there is a recession, cited a conspiracy blog to bash New York Governor Andrew Cuomo, and said he wants social distancing polices to be discontinued around Easter. Trump also insisted he and Anthony Fauci “get along very well” despite reports of frustration and the doctor’s public disagreements with the president.

As the interview played out, Hemmer and Fox News more broadly was slammed for the spectacle. Many of the criticisms centered on how Hemmer declined to challenge Trump’s statements and offered minimal pushback. There was scattered praise online for some of the questioning — but broadly it was panned for failing to educate the public on the current pandemic.

“This is an example of the Fox News presidency at its very worst,” Brian Stelter said on CNN after the interview. “He can go on a channel that lets him say whatever he wants.”

Trump now breaking in and pissed at Birx bringing up the Spanish Flu, and is now lecturing everyone on why they’re not comparable, and how we’re at less than 1 percent lethality, and “we have to put our country back to work.”
Hemmer ignores him and moves to the panel.

Trump: “I would love to have the country opened up and just rarin’ to go by Easter.” Hemmer: “That would be a Great American Resurrection!”

A very simple, basic, obvious question: What is your basis for saying that more people will die if we shut down the country than from the virus itself?

God help me I’m watching the Fox News townhall and I regret to inform you that Dr. Oz is subbing in for Dr. Fauci. ???

So, this Fox town hall is basically his daily “briefing,” but with questions from friendly, non-adversarial questioners.

Do not amplify misinformation.

If someone is consistently hyping snake-oil miracle cures, or making up stories about policies that aren’t real, stop putting a camera or a mic on that person as a source for information in this crisis.

Well, Fox News just aired a hourlong event with President Trump without correcting his assertion that the coronavirus isn’t more dangerous than the seasonal flu.

Trump is now attacking @andrewcuomo on Fox News, saying he should have bought thousands of ventilators years ago — neither of the supposed “straight news” anchors challenge him on this.

hannity occasionally stumbles into some news during his interviews with trump. hemmer seems content to just repeatedly ask trump how seriously he’s taking the virus (very, apparently) and let trump ramble on about how much he likes harris faulkner

No challenge from Fox. https://t.co/hje1UpmQcZ

Bill Hemmer has now asked Trump at least 3 times how he “processed” experts telling him to close the country down. As opposed to pushing back on Trump’s repeated comparisons of the coronavirus with the flu.

Mr. President, you’re doing a great job, and my question is, how great do you think you’re doing.

Really a disservice to the people of this country to waste an opportunity to ask tough questions and demand real answers from the president in the middle of a very real and deadly crisis.

This town hall has been a complete waste of time.