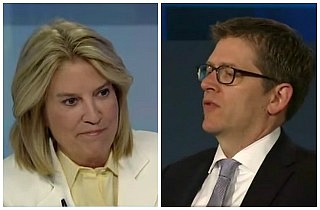 On Thursday, White House Press Sec. Jay Carney defended the White House’s record on transparency. He said that President Barack Obama‘s record releasing records on who has been cleared to enter the White House is unprecedented and causes the administration political headaches saying that it prompts Fox News to run “ridiculous stories.”

Fox News Channel host Greta Van Susteren was not happy with Carney’s comments.”White House delusional?” she titled a post on her blog. “Obsessed with Fox News Channel? Thinks we are the only ones that spotted this BS?”

“I love to get credit for identifying a falsehood but we are not the only ones,” she continued “I also know the White House likes to blame Fox News for all their problems, but it is NOT just Fox New that outs the White House about its false claim of transparency.”

She noted that New York Times Executive Editor Jill Abramson and the Associated Press have publicly criticized the administration on their approach to transparency issues. Van Susteren observed that Abramson called the administration “the most secretive” she has ever dealt with and two AP White House reporters said the president’s staff are “hypersensitive” about Obama’s image.

Van Susteren’s Fox colleague, Gretchen Carlson, also noted that The Times and the AP have criticized the White House on transparency issues in the past.