‘Gun Control is Dead’: Maher Thinks the NRA is ‘Just F*cking with Us’ Now 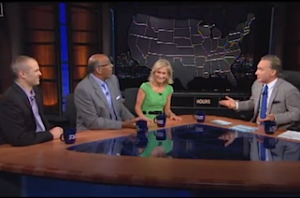 After last week’s recall election caused two pro-gun control Democrats to lose their State Senate seats in Colorado, Bill Maher has decided that “gun control is dead” for good. “I think the message was ‘Do not fuck with gun nuts, because they are nuts about their guns,'” Maher said, as part of his “epigraph” for the gun control movement. “You cannot overestimate how much Americans love guns.”

Weighing in from the right, Michael Steele said the push for stricter gun laws in America “died on the vine” this past spring, “when the momentum was not taken up by the Congress and the White House, quite frankly.” When Maher pushed back on this idea, Steele said “There was no real impetus to push this thing through, to get it to president’s desk, because if there were, we’d have the law in place, wouldn’t we?”

Maher and his other guests were flabbergasted by Steele’s assertion, with the host saying, “There was plenty of impetus, they just voted against it.”

Steele tried to pin the fault on the Democrats, but Rolling Stone’s Matt Taibbi countered with, “I think they voted against it because they’re crazy for guns.”

Bringing up the Iowa law granting legally people the ability to obtain gun permits, which has been Piers Morgan’s main beef this week, Maher said it sounded like something out of The Onion. “What could not get passed?” he asked. “Isn’t the NRA just fucking with us at this point? They realize that nothing they propose is ever going to get shot down.”

The Economist’s Zanny Minton-Beddoes picked up on Maher’s point about the NRA, saying they now seem to have the ability to recall any politician who does something their members don’t like. “I’m all for representative democracy,” she said, “but this seems kind of like buyers remorse.”

“If you think Democrats got scared about guns after Al Gore lost Tennessee in 2000,” Maher said, “this is where they’re really going to get scared.”