Hannity Praises Trump Campaign Ad: ‘Everything In There Is True’ (It’s Not)

Hannity Praises Trump Campaign Ad: ‘Everything In There Is True’ (It’s Not)

Sean Hannity, tonight on his Fox News show, played President Donald Trump‘s latest campaign ad while adding a personal approval of the ad stating that “everything in there is true.”

At least one of the claims in the Trump campaign ad, which was billed by Hannity as all being true, includes a claim on tax cuts which has been fact-checked, and deemed false.

The claim made by the Trump campaign and aired on Hannity states that under the administration the “largest tax cuts and reforms in history” was enacted into law.

An AP fact-check of the claim from the Trump administration concluded that President Donald Trump‘s “tax cuts are nowhere close to the biggest in U.S. history.”

The report from AP continues by stating that the Trump tax cut totaled $1.5 trillion over ten years, which ranks 12th in terms of size overall.

“President Ronald Reagan’s 1981 cut is the biggest, followed by the 1945 rollback of taxes that financed World War II,” the AP fact-check cited. 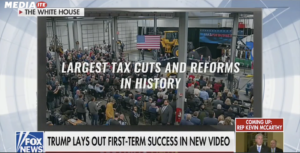 The ad which applauds President Donald Trump, with his own voice espousing his accomplishments, touts that “when America is united, America is totally unstoppable.”

After the ad concluded on the show, Hannity stated he had seen it on his Twitter account posted by Assistant to the President and Director of Social Media Dan Scavino who posted the video boasting Trump’s achievements.

“I saw Dan Scavino who works for the president “tweeted that out, and everything in there is true,” Hannity declared. Hannity then added praise for President Donald Trump keeping his promises and boasted that he is not “sick of winning.”

“The do nothing Democrats have done nothing. In the president’s case promises made, promises kept. All Americans are winning. I’m not sick of winning,” Hannity concluded.