Heartbreaking And Inspirational: Tearful Witness Begs Viewers To Remember ‘Life Can Be A Beautiful Thing’ 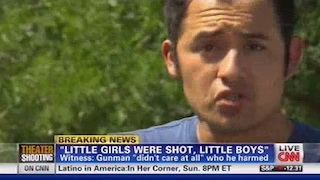 Throughout the day today, television viewers across the world have watched dozens of interviews of witnesses to last night’s massacre in Colorado. These innocent people have done their best to describe an unthinkable horror, many while displaying various signs of shock and trauma. One witness, a young man named Chris Ramos who desperately tried to protect his younger sister while watching the man next to him get shot, has done a series of interviews for outlets like CNN and ABC News. He appeared so shaken during these appearances that ABC was inundated with tweets from viewers who were worried about his emotional stability. However horrible that may be, Ramos was also able to give one of the most inspirational comments about these events that we’ve yet heard.

First, Ramos gave a couple of lengthy interviews with CNN. During the second one, he attempted to describe the “horror movie” like atmosphere of holding his sister to the ground while watching absolute chaos surround them. He tried his best but, after he described watching the teenaged daughters of the man shot next to him call their mother and say her husband was still inside the theater as well as his attempt to stop another man’s bleeding with a belt, Ramos began to break down.

As CNN’s Ed Lavandera tried to calm him down, Ramos gave viewers this terrible image:

Shortly after this, Ramos spoke to Good Afternoon America and seemed equally distraught. It was so bad that, during the next segment, Dr. Richard Besser was asked if Ramos may be “on the edge.” He responded with this quick prognosis:

“You know, the people who are there and watching Chris, he is expressing appropriate emotion for what he went through. It’s important that he’s able to talk about this. He just spoke to America about this. He needs to have friends and family to speak to, maybe clergy to speak to. It’s very likely he’s going to have trouble sleeping. He’s going to be replaying these events, he may be sad. He may not be able to eat. That’s appropriate things today. But you want him to continue to be in touch with people and follow him because if that continues for more than two weeks, then you say, ‘Okay, professional help may be what you need here.’

These people went through incredible trauma and, you know, fewer than half the people who experience this will have post traumatic stress but giving him support now can reduce that, can bring that way down.”

This all sounds horrible and bleak, but if there’s any brightness to any of this, it came at the end of Chris Ramos’ CNN interview. After he began to regain his composure, he offered these words:

“It’s a hard thing to get over, but it’s definitely not impossible. And I can’t change what happened at all, but the only thing that I can change is what is happening now. I know 12 to 14 people — I don’t know the exact number — they passed away. Their lives have been taken away. And the fact that a guy that was right next to me got shot, I don’t know how he is, but the fact that it missed me? I am thankful that I have a second life and I definitely don’t want the take it for granted.

But I know that there is evil in the world. I’m not naive about that. There is evil in the world but there is good. The one thing that I want people to know and the main message that I want to get across is not to forget that. To remember the good times of life and the beautiful things. And don’t just remember the horrible things about life because life can be a beautiful thing. We just have to be strong and overcome the evilness.

Like the movie of Batman. The true message of it? Standing up against corruption, against evil, against death. Standing up. Normal citizens just standing up to what is right. It’s ironic that that happened but that is basically the message that the Batman movies give out. Standing up for something that is right and ‘Even though the times get hard, the darkness is always darkest before the dawn.’ The second movie, that is what it said. It is exactly like this.”

Powerful and intense video on a very sad day. Below, you can watch the second half of Ramos’ CNN interview including the above quotes as well as Besser’s comments on ABC below that: