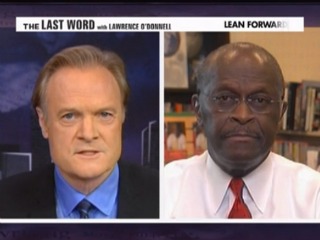 We here at Mediaite always enjoy it when a media personality invites an ideological rival onto his or her program because 1) the exchange and debate of ideas is far more interesting than a room of people patting one another on the back, and 2) sometimes things grow so awkward and/or heated that we watch through our fingers while dropping our box of jujubes all over the rug, squealing nervously.

On Thursday night’s episode of The Last Word, host Lawrence O’Donnell brought on GOP presidential hopeful Herman Cain, who is currently on a book tour, as a guest. And, in the words of Thomas Jefferson: Oh my God, you guys!

The segment started out with O’Donnell pointing to the support Americans on either side of the aisle have on raising taxes on those who make over one million dollars and asking Cain whether the Democratic party has “somehow managed to brainwash 81 percent of the American people into supporting that idea.” Cain’s answer? “Yes, the Democrats have succeeded at brainwashing a lot of the American people.” You might recall that, earlier, Cain had also used the term “brainwash” to describe the Democratic party’s pull with black voters. (But he didn’t mean all black voters, he clarified. Just some.)

O’Donnell then selected a viewer-submitted question, asking Cain how he would expect to gain the black vote after, as the viewer phrased it, “all he’s done is insult our intelligence.” “Well, first of all,” Cain replied, “I did not insult the intelligence of all black Americans. I insulted the attitude of those that will not consider an alternate idea.” And in fact, he added, Barack Obama’s recent comments to the Congressional Black Caucus are actually insulting to black Americans.

And then, of course, O’Donnell questioned Cain about Hank Williams, Jr.’s recent dismissal from Monday Night Football following remarks he’d made about Barack Obama. “Lawrence,” Cain explained slowly, “he didn’t call President Obama by name, first of all. Secondly, that was a poor choice of words. And, thirdly, that was the decision of the networks of whether to fire him or not.” Ok, sure, but what are Cain’s thoughts about Snooki? “Would you fire anyone in your campaign who said that sentence?” asked O’Donnell. “Depends.”

O’Donnell and Cain talked about so much more, as well, from a passage in Cain’s book where he describes “staying out of trouble” rather than directly participate in the civil rights movement, to Cain’s military service. O’Donnell, in fact, openly admonished Cain for his lack of participation in the movement — which, obviously, did not sit well with Cain one bit. “Did you expect every black student and every black college in America to be out there in the middle of every fight? The answer is no.”

Also notable is the two men’s exchange about homosexuality. O’Donnell once again turned to a viewer-submitted question, asking Cain when exactly — if homosexuality is indeed a choice — did he make the choice to be straight. But Cain was not having it:

Have a look at the exchange, via MSNBC:

Most notable in the second portion of the interview, perhaps, is Cain’s explanation of his comment to the Occupy Wall Street protesters. You might recall that Cain, reacting to the demonstration, said that one who is poor and unemployed should blame oneself. “Would you like to retract that now?” asked O’Donnell.

Lawrence. Some people are unemployed for no fault of their own. I was referring to those people who have chosen to go and demonstrate on Wall Street for whatever reason — and it’s not real clear what reasons.