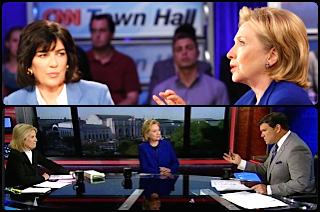 Hillary Clinton sat down for two heavily-promoted interviews on cable news Tuesday evening, but they did not deliver the blockbuster ratings CNN and Fox News were likely expecting — or at least hoping for.

Clinton’s town hall-style event with Christiane Amanpour was a distant second place at 5 p.m. and dropped to third when it re-aired in primetime at 9 p.m. And while her joint interview with Fox’s Bret Baier and Greta Van Susteren did keep Fox News in first place at 6 and 7 p.m., the numbers paled in comparison to the rest of Fox’s evening lineup.

When CNN re-aired the interview at 9 p.m. its number increased slightly to 146K in the demo and 593K in the demo. While those were the best ratings CNN had all night, it still put them in third place for the hour behind Fox’s The Kelly File (377K in the demo, 2.126M total) and MSNBC’s The Rachel Maddow Show (168K in the demo, 918K total).

Relatively speaking, things did not look all that much better for Fox. That network split its Clinton interview between the last 15 minutes of Special Report with Bret Baier at 6 p.m. and the first 15 minutes of On the Record with Greta Van Susteren at 7 p.m. The first hour averaged 271K in the demo and 1.779M total viewers, which represented a nearly 20% drop in the demo compared to The Five an hour earlier.

The bottom line is that the Hillary Clinton interviews were not able to move the needle in any significant way for CNN or Fox. A much-hyped, internationally-broadcast town hall event was not enough to lift CNN out of third place in primetime. And it appeared that Fox News viewers were not as eager to see right-leaning anchors confront the potential 2016 Democratic presidential nominee as many would have expected. The reaction from conservatives on Twitter demonstrated that those who did watch the Fox interview were not so thrilled with what they saw.

Unfortunately for Clinton, this could be an indication that Hillary-fatigue has set in even among those Americans who spend their afternoons watching cable news. While Clinton’s first major interview with Diane Sawyer last week drew 6.1 million viewers on network TV, cable news couldn’t come close.

As for that book she’s been dutifully promoting, sales show some signs of flagging as well. While Hard Choices

debuted at #2 overall on Amazon, it has since dropped to #5 behind a book about a 10-day green smoothie juice cleanse