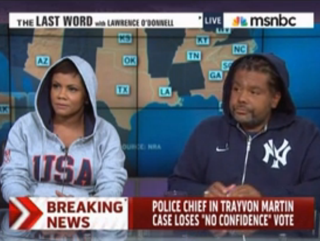 To mark today’s “million hoodie march” in New York in support of dead teenager Trayvon Martin, Goldie Taylor and Mark Thompson joined Lawrence O’Donnell dressed in hoodies to discuss the legal issues surrounding the shooting and the comments by police chief Bill Lee that Martin could “have done something differently, too.”

RELATED: The Trayvon Martin Story Is Too Perfect

Thompson began the response to O’Donnell’s questions about the Sanford city manager refusing to do anything against the police chief that dropped the ball on this case, stating, “I can’t imagine why in the world he would want to risk his credibility or his job trying to be polite.” They also turned to the Florida “stand your ground law,” which Taylor noted many argued “will allow or give license to racially motivated killings.” She noted it was troublesome to her because “I raised my son in one of those states… when he comes in contact with police officers or other people in authority, he needs instruction.” The message, she explained, of the hoodie march today to Martin’s parents was “we understand because we have sons, too.”

Thompson noted that the good thing about the media outrage was that, “certain stories have a certain shelf live… if they don’t arrest George Zimmerman soon, no other stories will get coverage.” O’Donnell brought up also what he called the “poisonous notion” the police department noted that “Trayvon would have done something differently, too,” an argument the panel agreed was meant to protect the police department.