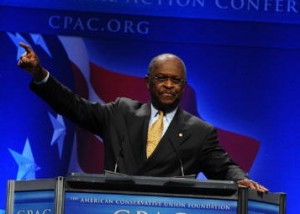 Tonight’s Bloomberg/Washington Post Republican Debate on the economy comes at a critical time in the GOP presidential race, as the last few weeks have seen some stunning shifts in momentum. While several candidates stand to lose big from tonight’s debate, up-and-comer Herman Cain is the only one who really stands to gain, and is in a nearly can’t-lose position. I predict that Cain will join Bloomberg TV as the big winners of tonight’s debate, and Mitt Romney will need Jedi skills to avoid a big loss.

Bloomberg can already put this debate in the “win” column on the strength of the fact that I now know what channel they’re on. There will surely be many political observers who tune in to channel 103 (check with your cable company) for the first time tonight. Hosting their first debate puts the network on the political map in a big way.

Herman Cain, meanwhile, benefits from a host of advantages going into the debate. He’s got incredible momentum, an energetic base of support that promises to be more durable than previous contenders, a signature policy (his “9-9-9 plan”) that’s right in this debate’s wheelhouse, and opponents who stand to gain little by attacking him.

Expectations will be high for frontrunner Mitt Romney, whose greatest strength is supposed to be on the economy, and his rivals, particularly wounded coyote Rick Perry, will be looking to score big hits on the former Massachusetts governor. Perry is looking to recover some support from the same base that loves Herman Cain, so his best bet is to damage Romney, and try to be the last man standing with Cain.

Some have observed a similar tactic from Romney, who saw the virtue of a Cain/Romney two-man race back during the Iowa debate, and who told a town hall crowd in New Hampshire last night, of Cain, ““We each have our own experiences, he’s a great guy. Vote for either one of us and you’ll be happy.”

The endgame, in either scenario, is that Herman Cain would be an easier candidate to beat. For Perry, that may be true, as his biggest problem, electability, shrinks next to upstart Cain, who has no governing experience. Romney, on the other hand, should be careful what he wishes for. The gulf between Romney’s unenthusiastically “electable” candidacy and Cain’s fervent support among the base could easily capsize such concerns.

Cain does have a few areas of vulnerability at tonight’s debate. Although the focus will be on the economy, but given the recent controversy surrounding Romney’s Mormon faith, Cain may have to answer for comments he made referencing it. Since debate co-sponsor WaPo also broke the story of Rick Perry’s controversial hunting camp, Cain and Perry might also be asked about that. Both are opportunities for a big soundbite, but Cain should have little trouble avoiding a fumble here.

His “9-9-9 plan” could also become a problem, depending on his preparedness, and the degree to which the moderators grill him about it. The plan is very popular with the conservative base, but not with economic experts, who point out that the plan doesn’t stand to raise nearly enough revenue, and that it’s a regressive plan that shifts the tax burden downward.

The criticisms of the plan, though, aren’t likely to resonate with GOP primary voters, so as long as Cain manages not to throw up all over himself, this shouldn’t be a problem for him. While this debate may not end up being a ratings blockbuster, the flattening of the political media ensures that any big hits, or misses, will resonate far and wide through replays on the web, and on other cable news outlets. Eggheaded clips about the flaws in the 9-9-9 plan aren’t likely to go viral. Plus, I’ve been told by several conservatives who have met Cain that he has an encyclopedic grasp on the minutiae of tax issues, so even if his responses are dubious in nature, he’s not likely to be tripped up.

Mitt Romney will have his hands full fending off desperate, fading candidates like Rick Perry and Michele Bachmann, and probably underestimates the threat that Herman Cain poses. By tomorrow morning, I don’t think he’ll be doing that any more.