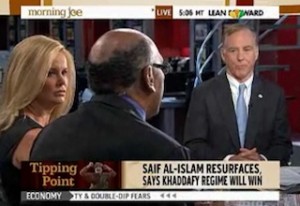 Former DNC Chair and current Vermont governor Howard Dean and former RNC Chair Michael Steele waded into the murky waters of political doctrine on today’s Morning Joe, pitting the former president George W. Bush‘s foreign policy against President Obama‘s, and then, ultimately setting the whole thing aside because, as Dean himself said, “that’s not what the election is going to be fought on; it’s going to be fought on economy.”

“The president is looking really good as Commander in Chief,” said Dean, pointing to the drawing down of the war in Afghanistan, the death of Osama Bin Laden and the prospective fall of Muammar Gadhafi. “Nobody’s had a foreign policy record like that” since Harry Truman he said.

“The White House feels very confident in terms of the Presidents reputation,” agreed Katty Kay, adding that “he’s been very tough on the war on terror.”

“That’s the irony,” says Steele, kicking off the debate by noting that it was exactly this sort of toughness that Bush played with. He continued:

“The interesting thing for a lot of us is to see the President take the Bush Doctrine, take a large measure of the Bush foriegn policy, even down to the personnel in many cases, and to continue to push that, given how hard he pushed against it as a candidate…. The of engagement by the candidate, by the candidate versus the president, to me, is very stark and has not been lost on a lot of folks.”

“You see, I think this is the Obama Doctorine,” Dean contended. “When Obama was running for president, he talked about doing things in real concert with others. Being a member of the family of nations instead of being, if you will, the Texas cowboy out in front of everybody else.” Then, in step with Katty Kay, he pointed to Obama’s willingness to let the British and the French take the lead in Libya. To which Steele contends that, perhaps, you might call that “one little sliver” a doctrine, but “I would call it happenstance,” he says.

“There has been a consistency there that has yielded benefits for him,” concludes Steele, who seems to believe that Obama’s foreign policy successes have, for the most part, piggy-backed on Bush policies. Dean, meanwhile, sees success in Obama’s policy where Bush’s failed, and assumes change.

What they do agree on is that, ultimately, and so long as the campaign continues to hinge of the economy, this is a debate that won’t come up often in the next year of campaigning. “This is on the way out,” says Kay, who gets the last word. “Jobs is not on the way out.” It’s too bad they left it at that, because we can’t imagine concern over foreign policy could ever be “on the way out.”