Ingraham Lists the Ways Dems Failed Blacks: ‘Do We Call That Racist?’
video

Ingraham Lists the Ways Dems Failed Blacks: ‘Do We Call That Racist?’ 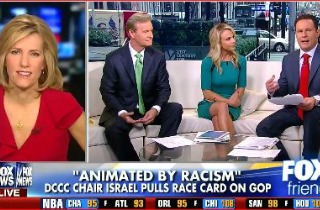 On Tuesday, conservative radio host Laura Ingraham said that the number of Democratic officials and officeholders accusing conservatives of appealing to racism against minorities is only indicative of the party’s electoral challenges. She asserted that accusations of racism are the Democratic Party’s “security blanket” and asked why we do not label the ways in which she claims the party has failed African-Americans racist.

RELATED: Holder: Comments About My Treatment Were About ‘Civility,’ Not Racism

“Steve Israel is reprehensible in what he said,” Ingraham insisted. “Nancy Pelosi, throw her into the ring.”

“I say this is a race to the bottom,” she continued. “The Democrats have failed the black youth in this country with their terrible economic approach. Do we call that racist?”

“They turn their heads away from the millions upon millions of black babies slaughtered in the womb over ten years,” Ingraham added. “Is that racist?”

“Is it racist that they allow inner cities continue to crumbles as families decay across the board in America — especially hard hit is African-American families,” the radio host asserted.

“It is reprehensible and it’s all about November,” She added. “This is not about ‘They care about black people.’ They care about their majority eroding away.”