Is It Time For Jon Stewart To Hang Up The Daily Show Gloves?

Is It Time For Jon Stewart To Hang Up The Daily Show Gloves? 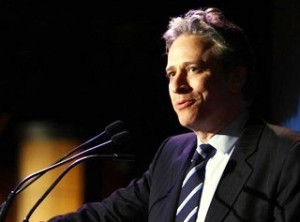 Twelve years, almost three Presidential elections, dozens of failed cable news shows and disgraced politicians later, The Daily Show is still alive and kicking. Sometime in 2010– a decade after his rise to host The Daily Show and the year that saw him and sometime partner-in-crime Stephen Colbert rally thousands to Washington D.C. to protest insanity, Jon Stewart could well be considered the most revered political satirist living in America today. But having that pedestal for years, four days a week, has left the format in dire need of reinvention, and for someone as tied to routine as Jon Stewart has been all this time, it is hard to imagine a reinvention for him without leaving the program.

RELATED: Rally For Sanity: They Also Want Their Country Back

Stewart has earned a position as one of the most beloved political figures in media, as more than a court jester to his fans but an almost infallible rhetorician with a gift for leaving those who challenge his wisdom regretting they ever tried. But more than one have noticed that he has never adapted his style of comedy to the times– partly because he previously hasn’t needed to– and increasingly threatens to be left behind. As Politico’s Alex Burns posited yesterday, to many, the Daily Show has been regularly overshadowed by The Colbert Report in actual political relevance. Many agreed, and many offered theories– that Stewart’s self-righteousness had become too big a fish in the small pond of ego-demolishing comedy; that his constant retreats into “I’m just a comedian” territory had made him a sort of Boy Who Cried Objectivity. Yes, the work done on The Colbert Report is often genuinely sublime comedy in its own right– from the Colbert SuperPAC to the far more dangerous interviews with far more controversial personalities– but that doesn’t diminish the fact that The Daily Show itself seems to be at an identity crossroads: it has lost the element of surprise and, with that, much of its charm.

The secret to longevity in the comedy industry as well as in politics is the ability to reinvent oneself– anyone from Madonna to Glenn Beck to Sen. John Kerry can tell you that. MSNBC’s Dylan Ratigan seems to have gotten the memo, writing yesterday, “Once you’ve said your piece, you can either keep saying it – or you can decide what you’re going to do about it.” Aside from the jump from offbeat MTV comedian to beloved political satirist, Jon Stewart has rarely done that. He made one shift from political sideshow to Serious Political Thinker when he almost single-handedly got Crossfire, the most interesting cable news experiment of its time, canceled by whining about how it “hurt America” or something. And he reached a sort of media apotheosis in 2010, following the Rally to Restore Sanity.

Aside from that, he has never exhibited a desire or ability to reinvent himself, and the result is that anyone who has watched on a semi-regular basis since he acquired the top spot at the Daily Show can more or less tell you what will transpire on any given night of the show. It works to some degree– ratings have certainly not noticeably declined. But good ratings and a bottomless well of political insanity to feed the show doesn’t mean the format hasn’t started to feel at least somewhat stale, especially when the supernova of exploitable theatrics that was Fox News’ Glenn Beck burnt itself out.

Most people who have watched with some regularity can plot out a Daily Show episode down to nearly every detail. Jon Stewart will pick some sniplets of news from the cable news networks– likely more CNN and Fox than MSNBC, though in egregious cases (like the misty-eyed Ed Schultz on Wisconsin recall night), them too. Stewart will play an absurd, outraged soundbite and stare aghast into the camera, perhaps punctuate his Aghast Face (and you know which one I mean) with an f-bomb or two. He will then play a clip of an equally absurd but nonchalant reaction to the outrage and mock it in a faux-mobster accent, possibly while waving his hands around and shrugging. Somewhere in there a favorite punching bag like Megyn Kelly or Gretchen Carlson will surface, saying something naive and contrived about “the children” and “morality” that Stewart will again hurl a profanity at, much to the delight of an approving audience that makes Real Time with Bill Maher look like Showtime at the Apollo. Then a correspondent will show up for a hackneyed bit about how Republicans are racist or, if no avenue toward that joke exists, something about genitals.

It is all very 2000s, very been there done that. Nothing about the Daily Show is fresh, but nothing about it is classic in that Johnny Carson, Celebrity Roast way. And so Jon Stewart has become a Bush-era anachronism, like Motorola Razrs and that Numa Numa song, partying liberally like it’s 2005. The problem is not a partisan one, as so many critics of Stewart’s work often claim– it does not matter anymore whether he attacks Fox News or CNN or MSNBC, and he has attacked each with regularity. Stewart counts among his fans many conservatives and liberals alike because the source of his comedic talent is not necessarily based on political dogma but on his exceptional ability to write good jokes. That ability has not eroded, but it has lost the gloss of surprise that comes from innovation. Stewart’s crass jokes and bad Italian accents are no long innovative no matter who they target, and that he recycles them so often is proof he hasn’t been trying to improve upon them.

That is not to say that he has any less talent than when he began, or that his rabidly loyal base is tired of him. They are mostly not, and even those who are exhausted of the style he clings on to so strictly can still appreciate the indelible contributions to culture America owes Stewart. But soon the day will come if they continue being fed the same diet Stewart has had them on for the last 12 years that they will tire, because humans en masse are only creatures of habit for so long. Someone who hasn’t been watching for years, will still find the sophistication of much of his comedy, particularly in the analogies he chooses to describe the most embarrassing bits of our political system, something extraordinary. But Stewart does this now with his eyes closed, and it shows that he, like his audience, is no longer straining to top himself. There is no more ambition in this comedy, and perhaps that is because Stewart has ridden this genre train to its logical destination. There are no more ropes left for Stewart to learn in this gym, and for such a versatile comedic athlete as this one, that means it’s time to find a new, more challenging arena.