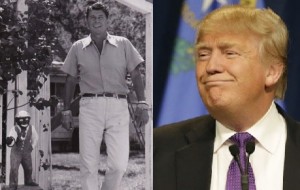 Republicans are shocked, SHOCKED, to learn that Donald Trump made a naked appeal to white supremacists over the weekend when he hedged on whether or not to denounce legendary Klansman David Duke, none more so than Morning Joe host Joe Scarborough. All morning, a parade of Republican guests and panelists have evinced horror that such a man is going to be the Republican nominee for president, but the most galling example of this utter garbage came from the face-hole of resident centrist columnist Mike Barnicle, who treated viewers to this poignant lament:

How about listening to another candidate for president who was once asked a similar question as the one Jake Tapper asked Donald Trump. That candidate replied “Those of us in public life can only resent the use of our names by those who seek political recognition for the repugnant doctrines of hate they espouse. The politics of racial hatred and religious bigotry practiced by the Klan and others have no place in this country and are destructive of the values for which America has always stood.” That was Ronald Reagan in 1984.

Barnicle is using some sleight of hand here, because in 1984, Ronald Reagan wasn’t just “another presidential candidate,” he was the incumbent president, running unopposed in his own party. Before we break our arms patting Reagan on the back for denouncing the Klan (a low expectation if there ever was one), let’s remember that when he was just another presidential candidate, a former entertainer who had been a lifelong Democrat, Reagan kicked off his 1980 presidential campaign with a speech about “states’ rights” in Philadelphia, Mississippi, where three civil rights activists were murdered in 1964.

That 1984 endorsement of Reagan by the Ku Klux Klan wasn’t the first, either. In 1980, Reagan similarly, if less loquaciously, refused their support, but the reasons they gave for the endorsement were telling:

The problem arose when the Knights of the Ku Klux Klan, said to be the biggest and most militant Klan group, endorsed Ronald Reagan. Its newspaper editorialized that “the Republican platform reads as if it were written by a Klansman,” citing such points as opposition to gun control, the Department of Education, and “forced busing.” Obviously, one does not have to be a Klansman to accept such views, and Mr. Reagan rejected the endorsement, saying , “I have no tolerance with what the Klan represents, and I want nothing to do with it.”

That’s what Republican “intersectionality” looks like. When you blow the whistle, all the dogs hear it.

But you don’t have to go all the way back to Ronald Reagan or the Southern Strategy to find the kissin’ cousins of trump’s campaign of white resentment. Hell, if you waited a few minutes on Morning Joe today, you got to see Mike Huckabee fanning himself over Trump, a guy who once suggested sodomizing opponents of the Confederate flag, for whom pro-Confederate groups ran ads in 2008, who called President Obama a “mau-mau,” and who even today tried to deflect on Trump’s behalf. Asking Mike Huckabee to denounce the Klan is like asking cigarettes to denounce cyanide.

You don’t even have to go back to 2008, though, to find popular Republican candidates campaigning on open hostility toward black people. If you feel like dismissing badly-coded references by the party’s last presidential ticket to “inner-city culture,” or  giving “free stuff” to minorities, or “urban turnout,” you’re in luck, because then-frontrunner Newt Gingrich slipped up and was actually explicit about naming black people as satisfied with food stamps instead of paychecks.

You don’t even have to go all the way back to the last election, because even the “nice guy” in this race explicitly said that black people just want free stuff, and in the days following the horrific racist mass murder in Charleston, current GOP racism talisman Nikki Haley joined every other Republican candidate in saying that the frustration of Trump’s supporters is legitimate, and in supporting racist voter ID laws. Their compassionate alternative to a Muslim ban is a Christians-only refugee policy.

This is what happens when your party is devoted to defending and strengthening a pro-white status quo, and when even those who don’t actively stoke white resentment are, at the very least, fine with it, and more commonly are happy to harness it. Republicans are all over Trump’s ass about the Klan, but they all either want to get rid of all the Mexican illegals, or openly state that the reason they don’t want to is that it’ll cost too much.

But the proof of the Republican Party’s responsibility for Trump goes beyond the considerable policy intersectionality and constant, decades-long philosophical reinforcement of white resentment. The proof is in the voters, whom my colleague Sam Reisman identifies as “Trump supporters” as if they just beamed down from the Starship Klanterprise. For far too long, the media has abetted Republicans in pretending that Trump’s popularity has to do with anything but a deep well of carefully-cultivated hostility toward all things non-white, non-straight, and non-male-dominated. Trump’s supporters are Republicans, and there are more of them than any other kind of supporter. They are you, Republicans, and you are them. Time for you to own it.