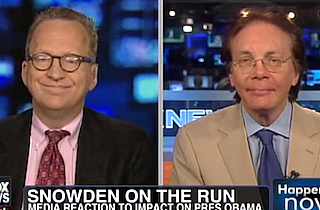 “There are probably communications going on between us and the former Soviet Union, with Russia,” Colmes said. “The time may come when the president does pick up the phone and talk to Putin. Obviously you want to try to solve it if you can at a lower level first. That doesn’t mean the president’s not engaged or wouldn’t become engaged at the appropriate time.”

“It’s worth remembering that the president did engage on that all-important issue of arms control with the Russians,” Pinkerton said, sarcastically. “The Russians have no interest in arms reductions and neither do the Iranians, yet the president gave a speech in Berlin saying we should have another arms control treaty. The president engages, but as Michael Goodwin wrote in the New York Post this morning, he engages in things that are fairytales and pixie dust about some liberal la-la land, arms control and climate change, and ignoring a huge security threat that is staring us in the face.”

“First of all, we don’t know what the security threat is,” Colmes countered. “Secondly, arms negotiations don’t happen at the president level. What the President did was give a speech and talk about things he’d like to see like nuclear reduction. That’s not the same thing, nor is it analogous, to what is an ongoing real-time situation right now involving Snowden.”

“The president has had the chance in the last two weeks to talk to the country directly about Syria,” Pinkerton argued in closing. “He’s had the chance to talk about Snowden and why that’s important. Instead, he’s delegated those issues, and he himself has talked about climate change and arms control.”