Jimmy Kimmel Sums Up ‘Major Rift’ in GOP: ‘That Did It, You F*cking Nutjob!’
VIDEO

Jimmy Kimmel Sums Up ‘Major Rift’ in GOP: ‘That Did It, You F*cking Nutjob!’ 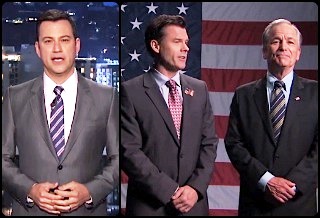 With the government shutdown grinding on into its third week and the debt ceiling deadline fast approaching, Jimmy Kimmel noticed on his show last night just how big the “rift” in the Republican Party has grown. As he showed his audience, the acrimony is even seeping into GOP political ads.

Kimmel set up the current scenario in Washington by taking a shot at the Democratic side as well. “Earlier today President Obama said he was hopeful an agreement would be reached tonight,” the host said, “but then again he was also hopeful that the Obamacare website would work and that isn’t really happening.”

He described the discord between moderate and tea party Republicans before showing a new ad in which two conservatives stand side by side and explain what their party stands for. “We’re Republicans,” the graying moderate says. “We believe in the principles America was built on: capitalism, free enterprise, individual initiative. We believe that every American should have the opportunity to succeed.”

“Except for the ones that snuck over the border to take our jobs,” the upstart tea partier cuts him off by saying. Things only get more tense from there, with the younger Republican jumping in with comments about the “half-breed” in the Oval Office and calling his colleague a “Commie.”

“Alright, that did it, you fucking nutjob!” the moderate says, before physically attacking the tea partier. The party’s new slogan says it all: “The Republican Party: Let’s Bring America Together.”