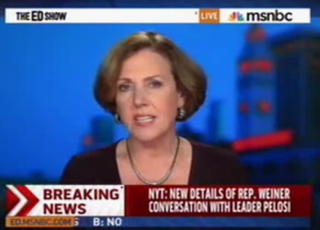 Rep. Anthony Weiner lied boldly to the media for more than a week since indecent photos appeared on his Twitter account, and many in the media who believed him are now airing their resentment and indignation. Among them tonight was Salon‘s Joan Walsh, who told Ed Schultz on MSNBC tonight that he made her “look stupid” for giving him the benefit of the doubt.

Walsh had been relatively quiet for the past day or so, but didn’t mince words about how she felt towards Rep. Weiner. “He implicated a lot of us,” she argued, calling his blatant lies “disturbing.” “I looked kind of stupid” she admitted, to which Schultz asked her to expand on why. “I gave him the benefit of the doubt publicly and pointed to the motivations of the people who were bringing this to light… he lied and that’s the worst thing.” She did, in her defense, note that “this was brought to light for political reasons” and that “this is private business, I’m not his wife.” Given these facts, Walsh said she was “proud” of House Minority Leader Nancy Pelosi for calling for an investigation and refusing to call for a resignation.

The conversation continued for some time thereafter providing the same level of fireworks– Press compared tonight’s coverage to Rush Limbaugh‘s and making several parallels to Bill Clinton. “We are now playing right-wing politics,” Press protested, igniting Schultz, who ultimately called the Limbaugh comparison “embarrassing” and telling Walsh and Press they were “in denial.”