Joe Scarborough took a shot at what President Donald Trump has repeatedly called the “greatest economy ever, strongest economy ever” on Friday, making his case with a New York Times report showing slower economic growth than the president claims.

“I think we can go to four, five, maybe even six percent ultimately,” Trump proclaimed. “Each percentage point is two and a half-trillion dollars. We are back. We’re really going to start to rock. We need this as our final push, and you’re going to see some numbers that are great.”

But Thursday’s report from the U.S. Commerce Department showed that GDP grew at only a 2.1 percent rate in the fourth quarter of 2019.

As the nation heads toward a presidential election, the question is whether voters will view steady but unspectacular growth as a sign that President Trump’s handling of the economy has succeeded or stumbled.

Gross domestic product, which measures the value of goods and services produced inside the United States, grew at a 2.1 percent annual rate between October and December, the same as the previous three months, according to preliminary data released by the Commerce Department. As for 2019 as a whole, the report shows that the economy turned in a weaker annual showing than it did in 2017 and 2018.

In previous decades, growth that consistently fell below 3 percent would have been seen as distressing. Now most economists — at least those outside the administration — see normal growth circling the 2 percent mark.

Before introducing Trump’s former White House Communications Director Anthony Scaramucci,  Scarborough revealed that he was “obsessed” with a graphic that compared economic growth under Trump to that under Presidents Bill Clinton and Jimmy Carter at the same time in their administration. That graphic: 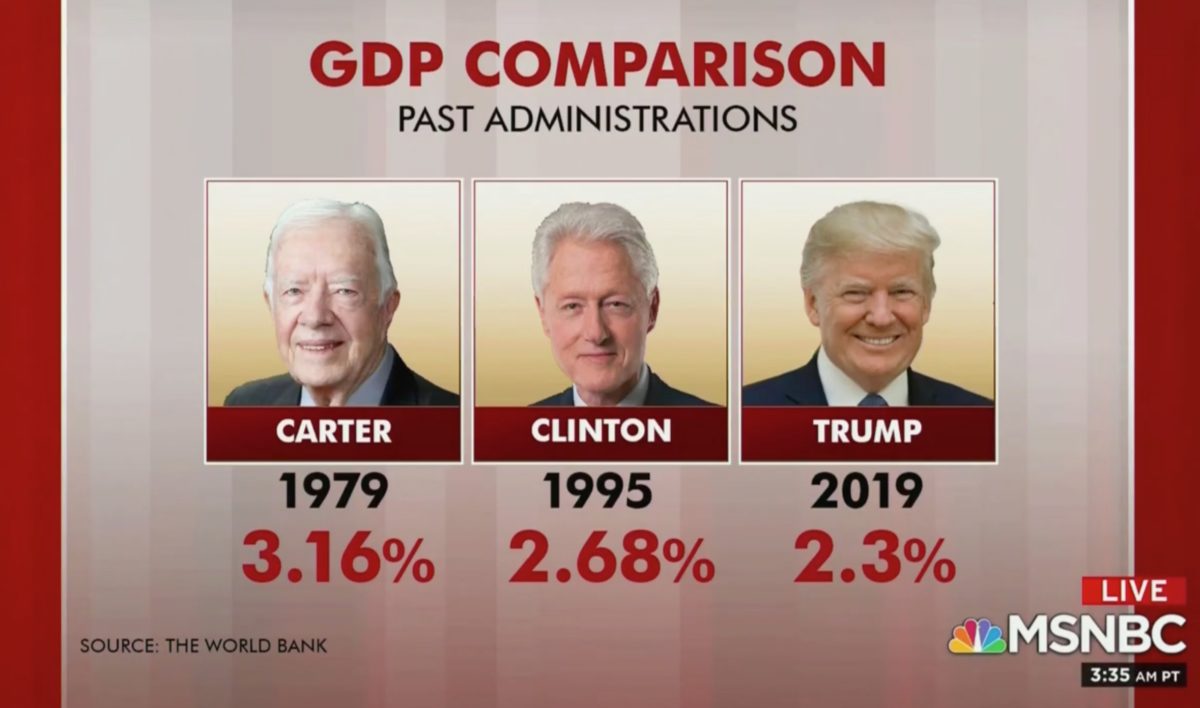 “All we hear, on repeat is what Donald Trump says about the economy,” Scarborough mocked. “Greatest economy ever, strongest economy ever.” After lauding Barack Obama for never talking about “how strong the economy was on the rebound” after he inherited the Great Recession, Scarborough turned to praise Jimmy Carter.