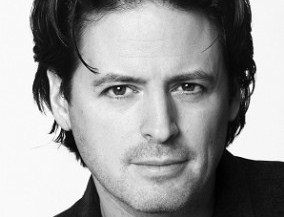 On Wednesdsay morning’s edition of Current TV’s Talking Liberally: The Stephanie Miller Show, comedian and cable news uber-contributor John Fugelsang announced that the network is developing a primetime show that he will host, debuting in the fall. In an interview with Mediaite, self-described “huge Mediaite whore” Fugelsang talked about his plans for the show, explained the role of religion in his work, described the most awkward scene ever in the Fox and Friends green room, and more.

The network hasn’t confirmed the timeslot for the show, but Fugelsang says “I think they’re going to have me on the later end of the primetime spectrum.”

“They know that my dream would be do to their late night show,” he says. “This will be the closest that their line up will have to that, I think. I wanted to do something that would really rattle the cage a bit, and make some waves, and I’m really impressed that they would want to give my kind of content a platform on this channel, I can tell they’re trying to make some waves. They have to make a splash on their network, and get some attention, and by putting people like Joy and Stephanie Miller and even Gov. Spitzer on the air, I can tell these guys are really serious about getting points of view out there we don’t hear too much in the mainstream media.”

“I think when you have a line up that’s made up of real journalists, I have so much respect for Bill and Cenk, and satirists, I think there is a reason people trust comedians more than politicians or anyone else. If its not true you’re not going to laugh at it. So I respect that they would hire Stephanie and Joy and me, and yeah, real bona fide elected officials like the two govs and Gavin Newsom.”

“It tells me I’m going to get a lot of different points of view than I would get from just a bunch of professional talking heads.”

Fugelsang comes to Current as an already-established fixture in cable news. Viewers of MSNBC, CNN, and even Fox News will recognize the comedian’s lightly-caffeinated style and Michael J. Fox-as-Elvis wedding chapel employee looks from regular appearances as a panelist and contributor. “I love doing Soledad O’Brien’s show,” he says. “I love her, I think she’s just fantastic, I think Soledad O’Brien is someone who, you know, we’ve seen so much of her and I don’t even think we’ve begun to see how talented she is.”

It was on O’Brien’s show that Fugelsang made one of his biggest splashes yet, eliciting the now-famous “Etch-a-Sketch” comment from Romney campaign communications director Eric Fehrnstrom.”After that, I don’t know if I had spooked CNN out, that their biggest headline of the year had come courtesy of a clown on air, but, you know, I’ll miss doing those shows.”

Fugelsang says he likes all the other news networks, and will still watch them all. Even Fox?

“I was actually on the 15th anniversary special of Fox and Friends,” he shares. “I was in a green room with Dana Perino, Rick Scott, Oliver North, and Michelle Malkin. It was a real experience.”

With a little arm-twisting, he continues. “They had the band Foreigner also on the show, and it was at the Villages in Florida, and of course it was like the second string members of Foreigner, it was all the guys in their 40s who were like in high school when ‘I Want To Know What Love Is’ was getting airplay. And, they were out there playing, and the crowd was cheering, and I actually turned to Oliver North and Dana Perino and said ‘am I the only one who finds it strange that a Fox News audience is cheering a band called Foreigner?’ And they just stared at me like I had shot Old Yeller, it was very awkward.”

The network itself is still trying to right itself since the departure of their onetime franchise player, Keith Olbermann, and Fugelsang is enthused about the direction they’re taking. “I’m really excited to be working with this particular piece of real estate, I just think that they are really really trying to take some risks, there’s going to be some really interesting editorial stuff going on here, and they’ve got some really talented people. When they hired Joy, I knew they were really serious about expanding their audience. You know, giving Eliot Spitzer a TV show is ,when you actually look at the content of what his show entails and how he meticulously goes after the Wall Street crooks in a way that I wish the Democratic Party would, it’s a pretty gutsy call.”

The John Fugelsang Power Hour(?) will feature cable news staples like journalists and politicians, but Fugelsang also wants to emphasize pop culture and political comedy.”I think it is so hard for political comics to get on TV, you can’t really do political material on Leno, Letterman or Conan, all you can really do is go on news shows,” he says, adding “there’s a lot of great political comics in America who don’t get much of a platform on TV and I want to give them a voice, and have a place where comics who aren’t afraid to talk politics, can come and debate the issues alongside bloggers, and journalists and elected officials, and have some really eclectic panels, and get the points of view out there that we don’t hear in the mainstream media.”

He also say “I want there to be a strong cultural component. My first job in broadcasting was working for VH1 when they tried to be a music channel for grown ups back in the 90s, and I did specials of George Harrison and Paul McCartney and Garth Brooks and Bruce Springsteen and Willie Nelson, and music is a very important part of my background, and I would like there to be an element of this show that deals with music out there, that’s not crap, for people who grew up on MTV and for grown ups who don’t necessarily always know what the cool new albums are. I want to be able to say, ‘well here, check out the new Mos Def or Alabama Shakes, or the new Leonard Cohen’s pretty good, whatever’s out there.’ I want the show to be about politics but also to be about culture, tech, science and, uh, fun stuff.”

One way Fugelsang hopes to rattle the cage is by taking on the religious right. “My mom is an ex-nun, and my father was a Franciscan brother. And in my stand up and in my commentary, I talk an awful lot about the fake Christians that frame the debate and make up the Christian right,” adding that he goes after them “not just because they are wrong about everything, but because they’re not Christians. And, my point of view always is, going to what Jesus taught versus what his unauthorized fan clubs say he taught.”

His  antipathy for the Crhistian right is rooted in his upbringing. “I was raised by very progressive Christians but who lived the life. My mom worked in Africa as a nurse with lepers in Malawi, my dad taught history to Catholic boys in Brooklyn, dressed like a lost Jedi Knight of Flatbush, and, you know, I come from a very very Catholic, half-southern half Brooklyn, Christian progressive background, and I know you can’t use the bible to say that being gay is a sin. You can’t. You either are misinformed or a hypocrite, and you can’t use the book of Leviticus. When the whole Chik-fil-A thing happened, you know, I was so disheartened hearing so much of the mainstream media saying that Dan Cathy was opposed to gay marriage because of his Christian beliefs. My point of view is, ‘what’s Christian about that?’ Christ never said a damn thing about gay people. He talked about monster trucks as much as he talked about gay people. It’s Leviticus that Dan Cathy believes in, and Leviticus also bans eating pork. So, you know, if you take that logic, the bacon, cheese and egg biscuit that is on the Chik-Fil-A breakfast menu is going to land Dan Cathay right in hell next to Liberace, if he really believes what he’s saying.”

“From what I understand,” he continues, “they are not the most revolting fast food chain in the world in terms of their food. But like all places, they have a lot of unhealthy crap on their menu. But you know, look, if he just came out and said I’m against gay marriage, because I don’t like gay people, I’d be fine with that, I have no problem with just being a bigot. That’s great, it’s a free country and you’re allowed to be a bigot. God knows, I hate plenty of people, I’m trying to change that, you have that right in a society based on liberty, you hate you want. But when you start using Christianity as cover for douchebaggery, I’m gonna call you out because you are a big fake Christian”

Fugelsang also thinks the press should focus more on presidential candidates’ religions. “If these guys are going to be using their religion to coerce us to give them our vote, we should really know how much light there is between the teachings of their religion and the policies their pushing. And I include both sides on this. I don’t really think Jesus would have been a huge fan of drone bombs. On the case of not allowing black men to serve in the priesthood until 1978, you know, a lot of people are talking about how racist that was, and, you know, some say that it was only because of President Carter threatening to take away their tax-exempt status that the Mormon church changed that rule, I know a lot of great Mormons, and I like Mormon people very much.”

“What’s interesting is, if the LDS church still had a policy that black men couldn’t hold the priesthood, we would call them racist, we’d call Mitt racist, and we’d be right to. But they don’t. However, both the Mormon church and my Catholic church, don’t allow women to serve in the priesthood, but no one wants to call them sexist, and I don’t know why, and I think that’s one of the big failings of both the Catholic and Mormon faiths is that they want you to believe that God makes 51 percent of the world population unworthy of the priesthood. I think that kind of sexism is bad for the religion, its bad for women, and it’s an insult to God. And those are the kind of questions that should be brought up. And as long as they’re going to talk about Reverend Wright, I think that planet Kolab is on the table for Mitt.”