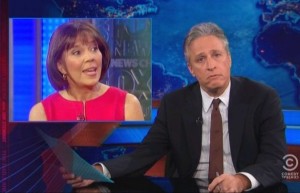 Jon Stewart looked at the recent national security leaks that he “highly think[s]” may be coming directly from the Obama administration, and more specifically, at the disdain one pundit has expressed with the danger of such leaks. Fox News Contributor Judith Miller strongly condemned the leaks as a threat to national security, which Stewart found as hypocritical, considering Miller’s past involvement in leaking national security information.

Stewart recapped President Obama‘s various national security successes, including the less-talked-about operation that took out Waldo. He noted that the Obama administration is being accused of leaking national security information to bolster the president in an election year. Stewart then ran footage of Miller saying just leaks “jeopardize the security of our nation.”

“And now, to bring the whole thing full circle, she’s on fucking television as the expert on why other people doing it is not good! When in reality, the move she is describing should be called ‘pulling a Miller.'”

Stewart then cued to a field piece featuring Jason Jones interviewing a former NSA agent who blew the whistle and got fired over a secret project called ThinThread.