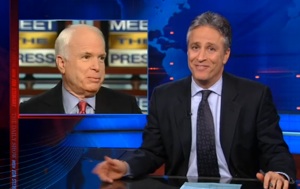 Senator John McCain and his wife Cindy appear to be on different sides of Don’t Ask Don’t Tell: Ms. McCain recently recorded a spot for a “NOH8” campaign that was a blatant critique of the policy of no openly gay military members, but then clarified via Twitter that she still supported her husband’s stance against reforming the controversial policy. This was perfect fodder for The Daily Show‘s host Jon Stewart, who presented a very similar case against McCain has Rachel Maddow did earlier in the evening.

There is no question that Mr. McCain’s apparent indecision (or “evolution” of position) over this, and many other issues is a growing meme among the political punditocracy. What’s also interesting here is how similar yet different Stewart’s take-down of McCain is compared to that produced by Maddow. As we reported earlier, the MSNBC host methodically, nay, surgically, used logic, reason and archival footage to portray McCain as perhaps the biggest “flip-flopper” in political history. By comparison, Stewart made the same point in a more comedic, stream-lined fashion, that culminated in a satirical PSA called “It Gets Worse,” based on the anti-bullying “It Gets Better” campaign.

The comparison is worth noting because Maddow and Stewart recently engaged in a lengthy debate over the role of opinion media and how they are similar and different. Mr. Stewart suggested that he is not in fact “the game” of opinion journalism, merely a sideline spectator. Maddow claimed that both he and she were doing the same exact thing, just with different methodology. The video below, compared to Maddow’s post seems to suggest that Rachel is right – they do do the same thing, with different style, yet with similar net effect.