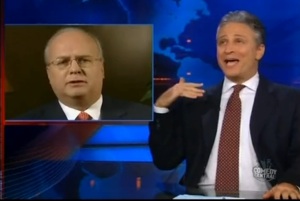 The Obama Administration and other Democrats have recently alleged that the GOP are using foreign donations to help fund political ads, focusing on the US Chamber of Commerce and calling for them to reveal the names of their donors. Fox News analyst Karl Rove and many other Fox News opinion media personalities, have expressed outrage over this allegation. Enter Jon Stewart, who last night compared their indignation over this allegation to their intense questioning over the funding of the so-called “Ground Zero Mosque.”

Stewart opens the segment with a funny refresher of the “Swift Boat Veterans for Truth,” and how groups classified as a “527” meant they could receive unlimited corporate donations for her political ads as long as they did not tell people to vote for a certain candidate and reported the names of their donors to the IRS. He follows with the alleged loophole created by the recent Supreme Court Citizens United decision and 501c4s.

How does this relate to FNC? One may recall that Fox News parent company News Corp. recently came under scrutiny for a $1 Million dollar donation to the GOP-friendly Chamber of Congress. One may also recall how, during the whole “Terror Mosque” controversy, Mr. Stewart “followed the money” that was funding News Corp (and Fox News) and arrived at Saudi Prince Al-Waleed bin Talal, a significant shareholder in News Corp.

One could reasonably surmise that News Corp. money that went to the Chamber of Commerce, and perhaps the $1 Million donation Republican Governor’s Association, came from bin Talal. Could this be the reason why a number Fox News’ on-air talent expressed outrage over any inquiry into the source of dollars going towards the US Chamber of Commerce? Or is it because the traditionally right-of-center opiniotainment programming on Fox News typically defends the GOP?

Time will tell. Until then, watch the funny segment below.