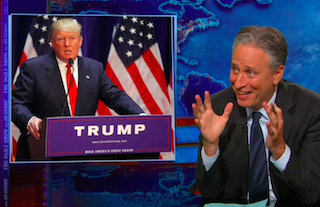 With just six weeks to go as host of The Daily Show, speculation is starting to fly about just how Jon Stewart will bid farewell to fans after 16 years at the helm. Last week, Stewart told Judd Apatow that he would probably just invite his comedian friends to serve as his final string of guests. But according to a new report from the New York Post, some of his mortal enemies might appear as well.

We hear that producers of “The Daily Show” have been reaching out to notables whom Stewart’s given grief over the past 17 years and asking them to take part in a segment that will be “their chance to turn the tables on him.”

Stewart’s last show is Aug. 6. Guests who take part in the pretaped segment, set to run as part of Stewart’s final show, will be given the green light to “basically tell Jon to ‘f–k off,’” a source said.

Among those likely to appear are Donald Trump, who has been a recent recipient of Stewart’s gleeful ridicule, along with frequent sparring partner Bill O’Reilly, Sarah Palin and more. But will someone like Sean Hannity have enough of a sense of humor to offer up a response to this?