Jonathan Capehart: Michelle Obama’s Reaction To Possible Senate Run Would Be ‘Hell To The Naw!’
video

Jonathan Capehart: Michelle Obama’s Reaction To Possible Senate Run Would Be ‘Hell To The Naw!’ 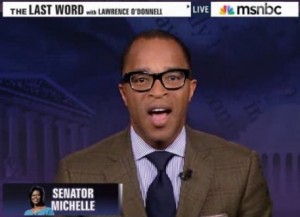 America loves its political dynasties, if recent history is any indication, so it’s not surprising that a majority of voters in Illinois told Public Policy Polling that they would support a run for U.S. Senate by First Lady Michelle Obama. By a 51% to 41% margin, voters prefer Mrs. Obama to current Sen. Mark Kirk (R-IL) in a hypothetical 2016 matchup, but there’s every indication that Washington Post columnist and MSNBC contributor Jonathan Capehart was correct when he theorized, on Thursday night’s The Last Word, that the First Lady’s response would be, “let me quote the late Whitney Houston, ‘Hell to the naw!'”

Following speculation about the First Lady landing in public office, or even the Supreme Court, PPP asked Illinois voters to weigh in on a potential senate run for Mrs. Obama, which would be a good first step toward an Obama White House dynasty, and as host Lawrence O’Donnell pointed out, the voters responded more favorably than polling on then-First Lady Hillary Clinton’s potential first senate run.

The President and First Lady put something of a kibosh on that idea in an interview on ABC’s The View back in May, when the President said “Look, Michelle would be terrific. but temperamentally, I don’t think that…”

“It is true,” Mrs. Obama added, “it takes a lot of patience to be the President of the United States. and I’m not that patient.”

She also said, several times during that May interview, that “I’m not interested in politics, never have been.”

This also appears to be the official unofficial position of the White House. An unnamed “top White House official” told The Daily Beast this recently:

“Michelle Obama doesn’t have the temperament for the constant b.s. that goes on in D.C.,” says this official. “She watched her husband fight fights that he shouldn’t have to. She’s seen the ugly side of Washington up close and personal and has no interest in dealing with that firsthand. I think she knows there are other ways to impact the system from the outside in. She’ll find those, but it won’t be through public office. That’s not who she is.”

While Capehart took the First Lady at her word, and O’Donnell called that statement from the White House a “semi-official leak” (he’s mostly right; it’s an obvious completely official leak), Anamarie Cox thought it sounded like a classic “non-denial denial.”

It’s possible that this is a denial with a deliberate safety valve, since the reason that everyone seems to have memorized, Mrs. Obama’s “temperament,” would be a difficult one with which to later attack her.

The prospect of a Michelle Obama candidacy, followed by a Michelle Obama presidency in 2024, right after President Hillary Clinton‘s second term, is a tantalizing one that promises, if nothing else, a generation of easy work for the political media. If you think conservative reaction to Barack Obama has been deranged, he’s Ronald Reagan compared to how they react to Michelle Obama.

However, that derangement is not likely to persuade an already-reluctant Michelle Obama to take the plunge, even with President Hillary to take some of the heat off of her. The last four years have made people forget how horrible conservatives were to Hillary before 2008, and how horrible everyone else was to her in 2008.